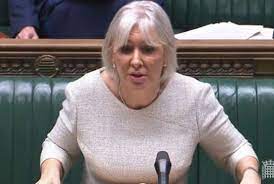 Culture Secretary Nadine Dorries has said people have become afraid to say what they think for fear of being “cancelled”, and that left-wing activists have “hijacked” social media.

In her first TV interview since taking the job, she said she does not plan “to charge out on a culture war battle”.

She criticised online campaigners for frightening young people “who actually do want to engage” in serious debate.

She also described negative reaction to her new role as “quite misogynistic”.

After her appointment in September, comedian Dom Joly said it was “like the result of some drunk bet” while fellow comic Mark Thomas said Dorries, who is also a successful author, had “written more books” than she had read.

“People were making these comments for political attack and nothing else,” she told BBC culture editor Katie Razzall. “I just found them thoroughly unpleasant.”

As culture secretary, her in-tray includes setting the price of a TV licence for the next five years, whether to privatise Channel 4, and introducing a law protecting young people from harms online.

She has also just announced a further £107m as part of the Culture Recovery Fund to help almost 1,000 arts and heritage organisations continue their recovery from the pandemic.

Last month, The Observer described Dorries as the “minister for culture wars”.

But in the interview earlier this week, Dorries said that was “what other people say about me, not what I say”.

She explained: “Sometimes I think we just need to tone down the condemnation and the judgement, and evaluate and engage a little bit more than we do. I think social media probably contributes a lot to this.

“People are afraid because of the amplification in the echo chambers of social media.”

Dorries has been outspoken on social media herself in the past, such as saying in 2017 that “left-wing snowflakes are killing comedy”.

She stood by that comment, noting that some comedians had recently expressed concerns that they could no longer make light of certain subjects. “I just said it first,” she told the BBC.

‘You can’t wipe away history’

Any such strident posts on social media are aimed at campaigners “on the left who have hijacked that space” rather than people who “do want to talk about these issues seriously”, she claimed.

She also said she doesn’t agree with removing statues and other memorials connected to the slave trade and other aspects of history, such as the Bank of England’s removal of paintings and busts of past governors and directors.

“You can’t, with this whole cancel culture, wipe it all out like it didn’t happen and pretend it didn’t exist,” she said. “You can’t wipe away our history, either the good or the bad.”

Dorries grew up in one of the poorest parts of Liverpool, and said her priority is to help young people from backgrounds like hers to get involved in arts, culture and sport.

“Those people in those backgrounds are of every colour and every sexuality, but are we looking after everybody when we talk about diversity?” she said.

Her reputation precedes her – as a politician who shoots from the hip, who has previously got into fairly heated Twitter rows with detractors, and who has been dubbed in some quarters the “minister for culture wars”.

Ahead of our meeting at the Young Vic theatre in London, one MP even told me to “strap yourself in for that interview”.

She’s a far more interesting culture secretary than many who have gone before, not least because she’s sold more than two million books. She may also be right that the critical reaction to her appointment from some in the sector was sexist and snobbish.

Some of her responses about how we all need to be kinder and listen a bit more to each other will raise eyebrows among those (and she does arouse strong feelings) who will claim Nadine Dorries herself doesn’t listen to opposing views. In the flesh, she was definitely in listening, even conciliatory mode.

Her professed mission – to widen access to the cultural and sporting world – felt sincere. She’s not the first to say it. But the difference is she speaks with authenticity as a result of her personal experiences.

She’s levelled up personally, rewarded with a cabinet job after intense loyalty to Boris Johnson. But as the 10th culture secretary in 10 years, will she be around for long enough to make a difference?

The £107m Culture Recovery Fund that was announced on Friday will help 925 theatres, museums, cinemas and other cultural venues and organisations “through the recovery period”, Dorries said.

The recipients include Leeds Grand Theatre, English National Ballet and The Marlowe Theatre in Canterbury, Kent, which have all received at least £1m each.

“Make no mistake about this. Many theatres would not be standing today if the government hadn’t supported them over the last 20 months,” she said.

Some commercial theatre operators like Sir Cameron Mackintosh did not receive emergency funding, but those who applied opened their accounts to the Treasury, she said.

“You’ll hear some people in the theatre sector say, ‘We didn’t get any of that money’, but they are still standing and they are still running with plays back up, which actually is testament to the fact that they didn’t need the funding, because they are still here. They have private investors.”

Dorries is also working on the new Online Safety Bill, which will require social media platforms to remove harmful content quickly or potentially face multi-billion-pound fines or even jail time for executives. She told them to get ready.

“They’ve had notice. They’ve got fair warning,” she said. “This bill is coming. Abide by your terms and conditions now. Remove your harmful algorithms now.”