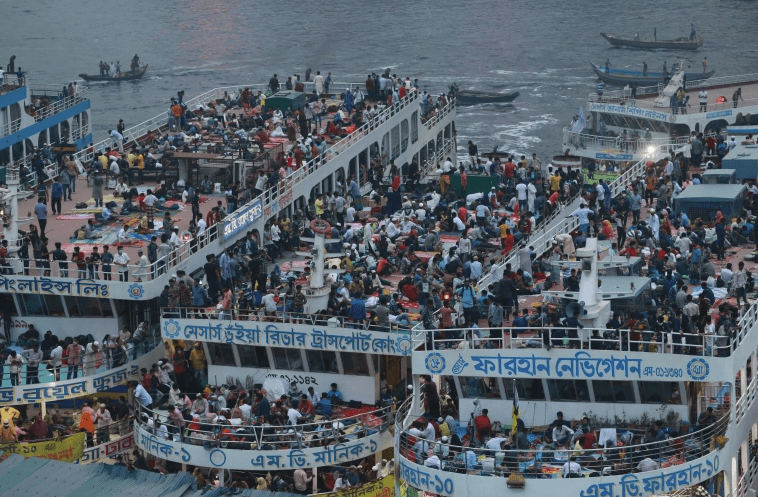 At least 24 people were killed and several dozen more were missing after a boat capsized in a river in Bangladesh, police said.

The overcrowded boat overturned on Sunday afternoon while returning from a Hindu temple on the other side of the River Karatoa at Boda area in Panchagarh district, said local police chief SM Sirajul Huda.

Divers and residents recovered at least 24 bodies by Sunday evening, he said, adding that at least 12 women and eight children were among the dead. He said many of the passengers swam ashore.

Another police officer said up to 25 people were still missing. Local media said at least 10 people were rescued and sent to hospital.

Thousands of Hindus in Muslim-majority Bangladesh visit the Bodeshwari Temple every year.

Sunday marked the start of the Durga Puja, the biggest Hindu festival in Bangladesh and adjoining eastern India, drawing large crowds to the temple.

Hundreds of people die each year in ferry accidents in Bangladesh, a low-lying country that has extensive inland waterways but lax safety standards.

At least 26 people died in May after an overcrowded speedboat collided with a sand-laden bulk carrier and sank on the Padma River.

In December, nearly 50 people were killed and more than 70 injured when a ferry caught fire in the southern rural town of Jhalokati.

A ferry sank in Dhaka in June 2020 after a collision with another vessel, killing dozens of people.

At least 78 people died in February 2015 when an overcrowded ship collided with a cargo vessel in a river west of the capital.