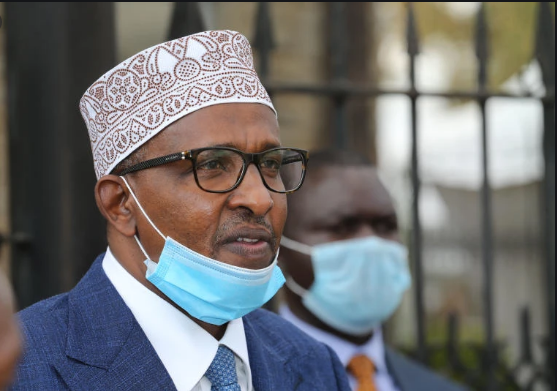 Garissa Town MP Aden Duale has warned Mt Kenya to be wary of Kirinyaga Governor Anne Waiguru and her Murang’a colleague Mwangi wa Iria, who he alleged were spearheading divisions in the region.

Speaking in Parliament on Wednesday, June 9, Duale argued that Waiguru and wa Iria were selfish leaders who dented the image of Mt Kenya after opposing the coronation of National Assembly Speaker Justin Muturi.

The former National Assembly Majority Leader added that Mt Kenya should read malice from remarks by the duo.

“Their sentiments show how selfish they are and they are depicting Mt Kenya as a selfish region. If they can do this to one of their own, imagine what Deputy President William Ruto and others are going through,” Duale cautioned.

He dared those plotting to oust Muturi to bring the motion to the floor, reminding them that MPs cannot impeach the speaker as they are only allowed to call for a vote of no confidence.

Waiguru on Saturday, May 22 rebuked Muturi adding that he ought to have consulted leaders and the people of Mt Kenya prior to his coronation.

“These ceremonies will not give him an upper hand. Ultimately Speaker Muturi and others seeking Mt Kenya votes will have to seek votes from the only legitimate determinants of leadership, the people,” Waiguru slammed.

“Allowing such a retrogressive activity to proceed will be tantamount to welcoming a curse on my people,” Murang’a Governor wa Iria added.

Muturi, however, challenged his critics to orchestrate his downfall, stating that he was a seasoned politician who enjoyed overwhelming support across borders.

President Uhuru Kenyatta’s cousin Kung’u Muigai added that Muturi was the voice of the head of state. “Muturi will be the supreme leader and will speak to the entire region on behalf of the president,” Muigai, an elder announced.