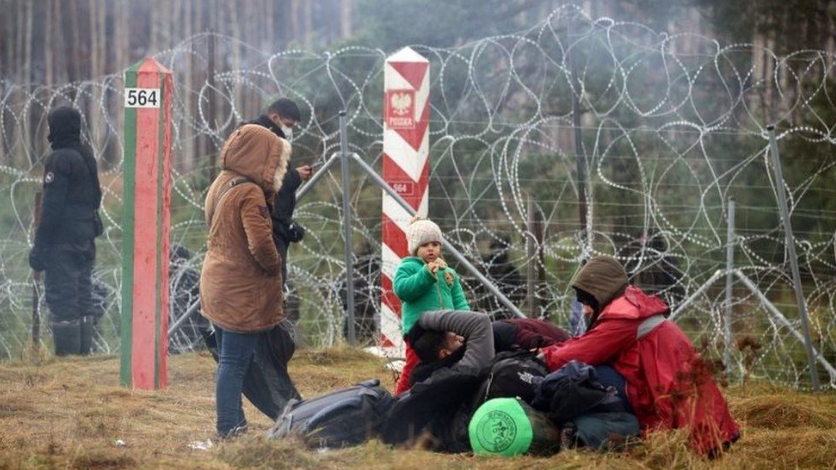 Poland has warned of a possible “armed” escalation on its border with Belarus, fearing its neighbour may try to provoke an incident with hundreds of migrants seeking to cross into the EU.

Extra troops have been deployed after desperate crowds tried to cut a barbed-wire border fence.

Poland, the European Union and Nato say Belarus is orchestrating the problem, a claim denied by its disputed leader.

Poland says it is shutting a major border crossing at Kuznica.

EU and Nato members Poland, Lithuania and Latvia have all seen a surge in the number of people trying to enter their countries illegally from Belarus in recent months. Many of them have come from the Middle East and Asia.

Government spokesman Piotr Muller said up to 4,000 migrants had gathered near Poland’s eastern border and told reporters that at some point they expected “an escalation… which will be of an armed nature”.

Local TV said many of the migrants gathering near Kuznica were accompanied by armed individuals with dogs.

The head of Poland’s national security department, Stanislaw Zaryn, said the migrants were under the control of Belarusian armed units. “Belarus wants to cause a major incident, preferably with shots fired and casualties,” deputy foreign minister Piotr Wawrzyk said earlier.

Overnight temperatures at the border have slumped below zero and several migrants have already died. Activists say the migrants – many of them young men but also women and children – are being used as pawns in a political game between Belarus and its neighbours.

The EU alleges Belarus’ authoritarian President Alexander Lukashenko is provoking the influx in retaliation against the bloc’s sanctions.

It imposed the measures after Mr Lukashenko’s crackdown on mass protests following last year’s widely discredited presidential election, and the arrest of a dissident journalist on board a Ryanair flight that was forced to land in Minsk.

Mr Lukashenko has repeatedly warned his government will no longer stop the crowds, accusing border guards in the neighbouring EU nations of being violent towards migrants.

Germany on Tuesday urged the EU to “take action” to help Poland secure its borders, while the Nato military alliance said the Belarusian authorities were using migrants as political pawns.

Lithuania has also moved troops to its border with Belarus to prepare for a possible influx of migrants.

Meanwhile, the US urged Mr Lukashenko to “immediately halt [his] campaign of orchestrating and coercing” the illegal flow of migrants.

Poland, which has been criticised for pushing back migrants and refugees at its border, has responded to the large number of people arriving in recent times by building a razor-wire fence.

As they are summarily expelled from Poland and Belarus refuses to allow them back in, people are finding themselves stranded and freezing in Poland’s forests. Several have died of hypothermia.

The BBC’s Paul Adams spoke to Barwa Nusreddine Ahmed, the brother of one Iraqi migrant who was at the border with his wife and three children. They arrived in Minsk, the capital of Belarus, last month.

With little to eat or drink, the people stuck at the border were suffering, Mr Ahmed said.

He said Monday’s move to the border post was planned on social media by the migrants themselves, but suggested Belarus was pushing them.

“People know they’re being used [by Mr Lukashenko], but they have no future,” Mr Ahmed said.

Tensions intensified on Monday when videos posted on social media showed a column of people, including women and children, walking towards the Polish border in Belarus.

Other videos showed large numbers of migrants being escorted by armed men dressed in khaki.

In other footage shared on social media, crowds of migrants can be seen attempting to breach a razor wire fence at the border, but being prevented from passing through by Polish border guards.

The Belarusian border guard agency earlier told state media that more than 2,000 “refugees” had amassed in front of Polish barriers. They were heading for the EU “where they want to apply for protection”, the agency said.