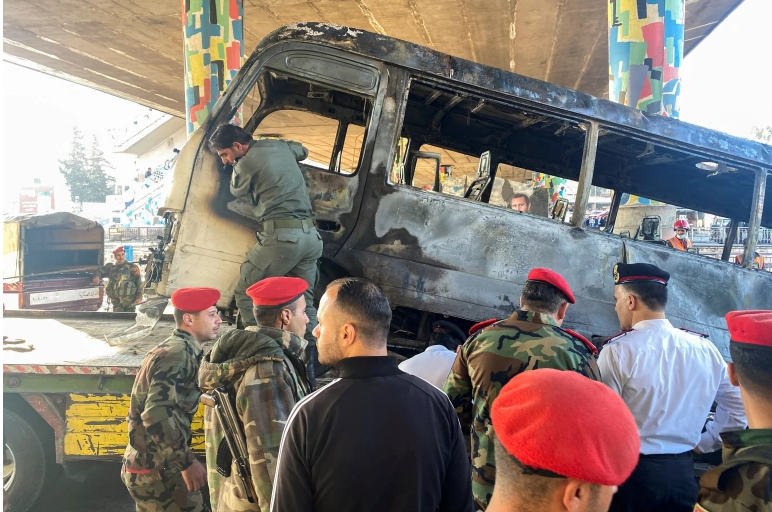 A bomb attack on a bus carrying troops in the Syrian capital Damascus has killed at least 14 military personnel and wounded three others, state TV and a military official said.

The attack early on Wednesday was the deadliest in Damascus in years, and a rare event since government forces captured suburbs formerly held by opposition fighters in Syria’s 10-year-long conflict.

Syrian state TV showed footage of the charred bus in central Damascus, saying the attack occurred during rush hour when people were heading to work and school.

Two explosive devices went off as the bus was near the Hafez al-Assad bridge, it said, adding a third device was defused by an army engineering unit in what officials said was a “terrorist” blast.

A military source quoted by the state news agency SANA said the bombs had been planted on the bus itself.

There was no immediate claim of responsibility for the attack.

“It is a cowardly act,” Damascus police commander Major General Hussein Jumaa told state TV, adding that a police force had cordoned off the area immediately and made sure there were no more bombs. He urged people to inform authorities about any suspicious object they see.

Al Jazeera’s correspondent Zena Khodr said the attack, which occurred in the heart of the Syrian capital is clearly a “security breach”.

“The regime definitely has many enemies,” she said, speaking from the Lebanese capital of Beirut.

One is opposition fighters, who are largely confined to the north of the country, she explained. There are also ISIL (ISIS) fighters who continue to operate in the sprawling desert area of the country and engage in ongoing clashes with the regime time and time again.

“Then there’s also division within the security apparatus, within the army and within the region itself. So we can only speculate but clearly the regime believes it is the opposition,” Khodor added.

“Just a few minutes after that explosion was reported, heavy artillery shelling targeted a town in Ariha, which is in the opposition-controlled southern Idlib countryside. At least 10 people were killed, many of them on their way to school. This is seen as some form of retaliation on the part go the regime, even though this area faces regular fire despite the ceasefire that was in place last year.”

Joseph Daher, affiliate professor with the wartime and post-conflict Syria project at the European University Institute, said the explosion shows once again that Syria is “very far from any kind of stability”.

“The regime is threatened by multiple actors,” he said, speaking from Geneva. “This type of terrorist action is a trademark by the so-called Islamic State [ISIL], which despite the 2019 defeat by US joint forces and SDF did not mean the end of the organisation, and still poses as a threat and security challenge especially after the change of the strategy.”

“This shows once again we are very far from any kind of stability in Syria, whether politically, militarily, or economically. We’re still in a conflict situation.”

The attack on Wednesday is the deadliest in the capital since a bombing claimed by ISIL hit the Justice Palace in March 2017, killing at least 30 people.

In August, Syria’s state media said a short circuit triggered an explosion in the gas tank of a bus carrying soldiers, killing one and wounding three.

Blasts in Damascus have been rare since forces loyal to Syrian President Bashar al-Assad took control of rebel enclaves around the city. Helped by Russia’s military presence and Iran’s militias, al-Assad now controls most of the country.

Syria’s conflict, which began in March 2011, has left more than 350,000 people dead and displaced half the country’s population, including five million who are refugees abroad.