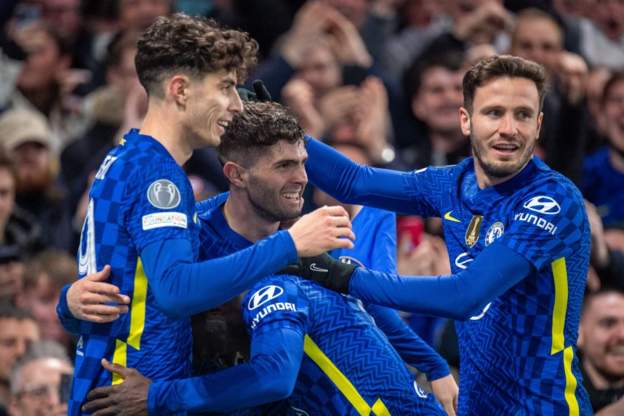 Chelsea continued its Champions League title defense with a 2-0 victory against Lille in the round of 16 game at Stamford Bridge. Kai Havertz’s header inside the first eight minutes opened the scoring for Chelsea on Tuesday, before Christian Pulisic wrapped up the win when he finished off a break by N’Golo Kante midway through the second half. The victory gives Chelsea a healthy advantage ahead of the second leg at Lille on March 16.

“I think we didn’t play our best football, it was hard,” Havertz told BT Sport. “We could not get, I think, the aggression on the pitch that we used to have in the last few weeks.”

Before his goal, Havertz had two chances to give Chelsea an early lead, first as he tried to convert a cross from César Azpilicueta, then again when he had a shot saved by Lille goalkeeper Léo Jardim.The German international, who scored the winner in last year’s Champions League final against Manchester City, eventually got his goal moments later when he headed past Jardim from Hakim Ziyech’s corner.

Lille, the defending champion in France’s Ligue Un but currently eleventh in the table, settled into the game after Havertz’s goal, but failed to produce a clear goal-scoring chance in the first half.Chelsea continued to control the game in the second half. The Blues doubled their lead just after the hour mark, when Kante drove the ball towards Lille’s box and passed to Pulisic, who chipped the ball into the back of the net.Having won the Club World Cup earlier this month, Chelsea now has a chance to win more silverware this weekend against Liverpool in the EFL Cup final

In Tuesday’s other game, Villarreal and Juventus drew 1-1 following Dani Parejo’s second-half equalizer for the Spanish side. That was after Dusan Vlahovic, making his Champions League debut, had scored just 33 seconds into the match to give Juventus the lead. The teams also meet again on March 16 to determine who progresses to the quarterfinals.