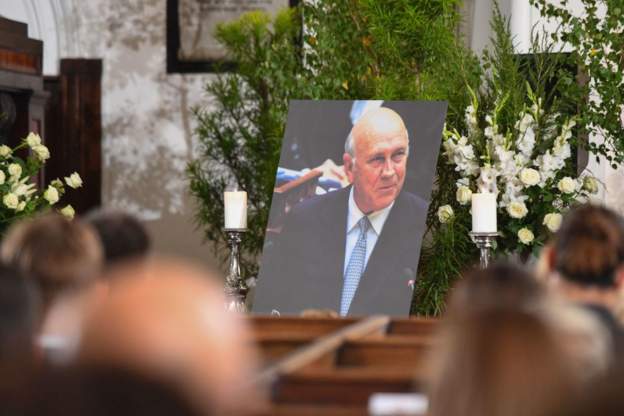 In his eulogy to South Africa’s last president of apartheid South Africa, FW de Klerk, President Cyril Ramaphosa tried to strike a balance between acknowledging the ill-feeling there is still towards him and his contribution to creating a democratic country.

De Klerk, who died last month at 85, was instrumental in leading the country’s white minority towards accepting the dismantling of the racist apartheid system in the 1990s.

At the same time, he was a beneficiary of that system and responsible for some of its crimes.

Speaking at a state memorial service in Cape Town, President Ramaphosa said that De Klerk’s 1990 address calling for the release from prison of the leader of the anti-apartheid struggle, Nelson Mandela, was a “brave act”.

He also praised his “courage and conviction”.

But Mr. Ramaphosa added that it was important to recognize that “his contribution and his legacy remain contested”.

“We can neither ignore nor must we seek to dismiss the anger and the pain and the disappointment of those who recall the place FW de Klerk occupied in the hierarchy of an oppressive state.”

Nevertheless he “played an important role in the evolution of our new democracy whether we like it or not”.

Before the memorial service, police broke up a small protest outside Cape Town’s Groote Kerk with demonstrators demanding “justice for apartheid victims”.