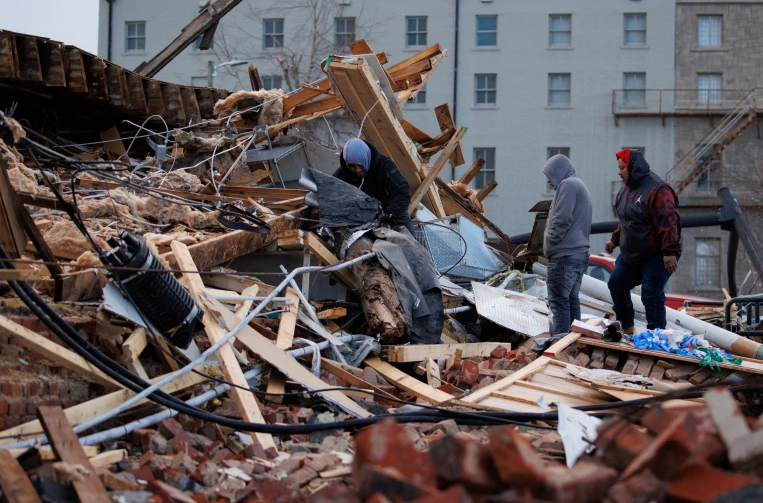 Kentucky governor says up to 100 people could be dead in the state as casualties also reported from other states.

A series of tornadoes have ripped through Kentucky and several other US states overnight on Friday into Saturday, killing dozens of people and leaving a trail of destruction in their path.

Many people were trapped after a roof partially collapsed at an Amazon.com Inc warehouse in Illinois state on Friday, local authorities said.

“I fear that there are more than 50 dead … probably closer to somewhere between 70 and 100, it’s devastating,” Kentucky Governor Andy Beshear said on Saturday.

Beshear, who declared a state of emergency, said the strongest tornado tore 200 miles (322km) through the state, calling it the “most severe” in “Kentucky’s history”.

At least four tornadoes touched down overnight across Kentucky, causing significant damage in more than a dozen counties. The primary tornado travelled more than 227 miles (365 km) across the state.

Some of the worst destruction was in Mayfield in western Kentucky. About 110 people were inside a candle factory in the area when the tornado ripped through, taking down the roof, Beshear said.

“The reports are really heartbreaking,” he said. “This has been one of the toughest nights in Kentucky history and some areas have been hit in ways that is hard to put into words.”

Video and photos posted on social media but not yet verified as authentic by Reuters news agency showed brick buildings in downtown Mayfield reduced to rubble, with parked cars nearly buried under bricks and debris.

In the early hours, more than 56,000 people in Kentucky were without power, Beshear said. He declared a state of emergency and was deploying dozens of national guardsmen to communities.

“It appears that this is going to be a quad state event, all out of the same system, originating in Arkansas, through Missouri, Tennessee and into Kentucky,” Kentucky Emergency management director Michael Dorsett said.

The storms caused a CSX company freight train to derail in western Kentucky, although it said no injuries were reported, the New York Times said.

In Illinois, police said there were “confirmed fatalities” after a roof partially collapsed at an Amazon.com Inc warehouse in the town of Edwardsville late on Friday.

Rescue workers were searching for people trapped in the rubble.

Drone footage of the warehouse showed a chaotic scene in the early morning dark, with hundreds of emergency vehicles around the area, and rescuers with flashlights combing through debris.

Illinois Governor JB Pritzker said, “My prayers are with the people of Edwardsville tonight.”

“Our Illinois State Police and Illinois Emergency Management Agency are both coordinating closely with local officials and I will continue to monitor the situation,” he added.

In a statement, Amazon spokesperson Richard Rocha said “the safety and well-being of our employees and partners is our top priority right now. We’re assessing the situation and will share additional information when it’s available.”

It was not immediately clear how many people were hurt, but one person was flown by helicopter to a hospital.

Early on Saturday, rescue crews were still sorting through the rubble as branes and backhoes were brought in to help move debris. Police said the process would last for several hours.

Meanwhile, Dean Flener, spokesman for the Tennessee Emergency Management Agency, said three storm-related deaths had been confirmed in the state’s northwest. >Two of the fatalities occurred in Lake county, and the third was in Obion county.

At least one person was killed and five were seriously injured when a tornado shredded the roof of a nursing home in Monette in northern Arkansas, US media reported.

Craighead county official Marvin Day told local news channels that rescuers had successfully pulled out those trapped in the building and the structure was “pretty much destroyed”.