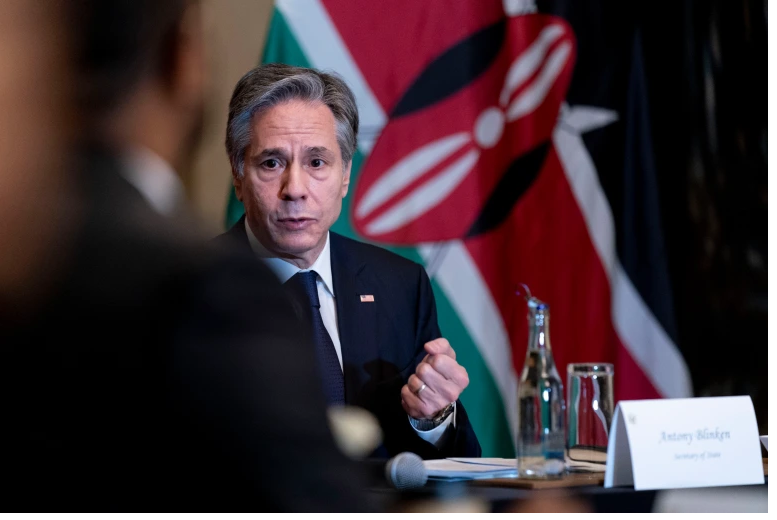 US Secretary of State focused on Ethiopia while visiting neighbouring Kenya during first trip to sub-Saharan Africa.

United States Secretary of State Antony Blinken warned on Wednesday that the worsening conflict in Ethiopia risks “peace and stability” in the wider Horn of Africa.

The US secretary of state hailed Kenya’s recent efforts to reach a ceasefire between the government of Ethiopian Prime Minister Abiy Ahmed and the Tigray Liberation Front (TPLF) fighters.

“We’d like to see the parties come together at the table to put in place the cessation of hostilities,” Blinken said. “We need to see humanitarian assistance flow freely now. We need to see people detained released and we need to see everyone engaging in an effort to resolve the differences that exist peacefully and constitutionally.”

The visit came as the African Union and other regional actors had been scrambling to calm the violence, which began in November of last year when Abiy sent government forces to the northern state of Tigray. Addis Ababa has since been accused of blockading the region and inhibiting the flow of international aid.https://imasdk.googleapis.com/js/core/bridge3.489.0_en.html#goog_1685626135Play Video03:01As Ethiopia’s conflict grinds on, fears rise

Meanwhile, Tigrayan fighters have advanced into the neighbouring Amhara and Afar regions. In early November, the TPLF announced they had created a coalition with other rebel groups and pledged to march on the Ethiopian capital.

In response, the government has imposed a state of emergency that has seen a wave of arrests, predominantly of ethnic Tigrayans.

International observers have said both sides committed abuses during the year of fighting, which has killed thousands of people, displaced more than two million, and left hundreds of thousands facing famine-like conditions.

Speaking to reporters alongside Blinken on Wednesday, Kenya’s top diplomat Omamo said Nairobi maintained hope that the situation could be resolved before escalating further.

“We believe in the potential of Ethiopia to find a resolution to this crisis,” she said. “We believe that a ceasefire is possible.”

That came after President Kenyatta on Sunday made a surprise visit to Addis Ababa, where Kenyan officials said he held private talks with Abiy and Ethiopian President Sahle-Work Zewde.

Abiy later posted photos on social media of the pair jovially greeting each other on the tarmac.

Blinken, meanwhile, said Washington was continuing to prioritize supporting diplomatic efforts to resolve the situation, even as the US Department of State on Tuesday urged all US citizens to leave Ethiopia immediately.

The Biden administration in September outlined a host of possible sanctions and other punitive measures against Abiy’s government, but to date, Washington has not sanctioned either side in the conflict. Last week, however, the administration sanctioned six Eritrean officials, saying the country’s actions in Ethiopia were prolonging the fighting and perpetuating the crisis.

“The bottom line is that there is no military solution to this conflict,” Blinken told reporters. “Every party has to recognise that and act accordingly.”

“With regard to atrocities, we have deep concern about that as we have over the past many months. It is something that we are looking at very closely, very carefully, and making determinations as we go along.”

Blinken’s trip to Kenya made him the highest ranking US official from the administration of President Joe Biden to visit sub-Sahara Africa.

He will visit Nigeria next, where he will deliver an address on US policy towards the continent – a policy area that observers have said lagged amid the Biden administration’s efforts to rebuild relations with Europe, the troop withdrawal from Afghanistan, and heightened emphasis on the Indo Pacific.

He will finish the trip in Senegal.

Earlier in the day, Blinken met Kenyan civic leaders and he spoke about the importance of combatting “democratic recession” around the world, including challenges in the US that show “just how fragile our democracy can be”.

The continued response to the coronvirus pandemic and climate change also topped his discussions with Kenyan officials.

He added the “civilian-led transition, which was derailed by the military takeover a few weeks ago, needs to be put back on its tracks” including restoring Abdalla Hamdok as prime minister.

He added the Biden administration was still conducting “a global posture review” that includes an assessment of former President Donald Trump’s decision to withdraw nearly all US troops from the country.