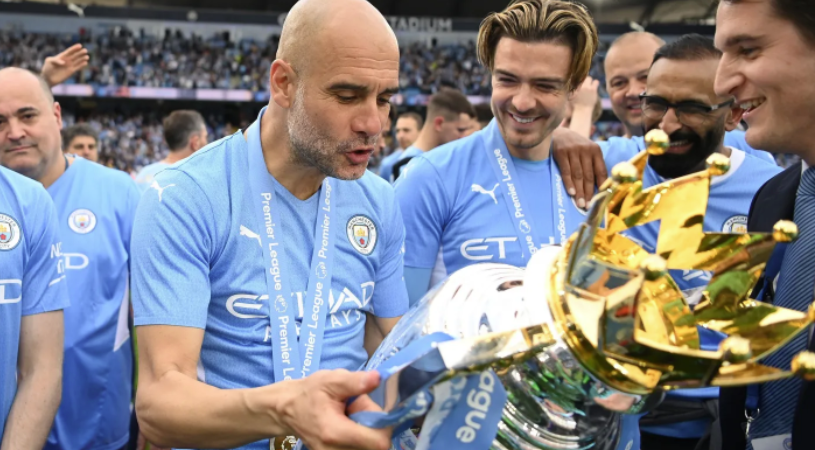 Pep Guardiola’s side clinched their fourth title in five years in dramatic circumstances, but their triumph was about more than just fine margins

In the chaos and the carnage of those crazy five minutes at the Etihad Stadium on the final day of the Premier League season, it can be easy to forget what happened in the nine months that preceded it.

The 37 matches, the 3,400 minutes, the 96 goals that went before which meant the title race came down to just a single game, a single point and eventually a single crucial strike from Ilkay Gundogan.

Manchester City’s long campaign couldn’t have been any different to that final 90 minutes and the remarkable 3-2 victory over Aston Villa that clinched them a fourth title in five years.

At their best, Pep Guardiola’s side are unstoppable, possessing a control and quality that has seen them surpass 90 points for a third season under his watch.

Quite where that went to on the final day of the season, no one will care, but it has been instrumental in shaping their success over Jurgen Klopp’s incredible Liverpool team.

Just one point was the difference between these two extraordinary sides – a Liverpool team that could yet claim their third trophy of the season next weekend and kept hopes of a first-ever quadruple alive until the final weekend of the Premier League season, further than any team had before them.

“We are legends,” the City boss said after clinching the trophy. “When you win the Premier League in this country four times in five seasons, it is because these guys are so, so special. We will be remembered.”Getty/GOAL

In tight title races, Guardiola insists that it is the small margins make the difference, and there have been enough to look back on throughout the season when picking out moments that made a difference.

Gabriel Jesus’ winning goal at Chelsea that changed the story after three quick defeats to Thomas Tuchel’s team at the end of the previous season. Rodri’s incredible challenge to stop Fabinho’s late winner at Anfield. The Spain midfielder’s injury-time winner at Arsenal on New Year’s Day. The fightback against West Ham when control looked like it was slipping away on the penultimate weekend.

And, of course, the ridiculous final day against Aston Villa, when they were 14 minutes away from letting the title slip away, only for them to storm right back.

How ironic that it was the character and personality on the final day that dragged them over the line, something that has been challenged by a host of former players and angrily rejected by Guardiola.

When City fell to a calamitous double strike against Real Madrid in the Champions League semi-final, there were many that believed they would also fall under the Premier League pressure from the relentless juggernaut of Liverpool steaming up behind them.

From a 14-point lead in December – albeit having played two games more – they dropped below Jurgen Klopp’s side in the final weeks of the season, when kick-offs were staggered.Getty Images

But City have been beaten only once in the Premier League since October, and not away from the Etihad Stadium since the opening day at Tottenham.

Back then the talk was about Harry Kane, the England striker sitting in the stands and expected to make the move to Guardiola’s side. But when they refused to match Spurs’ huge asking price, City went into the season without an orthodox striker.

While the critics will always point to the money spent as the platform for success, to finish with a league tally of 99 goals is an extraordinary achievement.

It shows the tactical ingenuity of Guardiola to rearrange his side and maintain their deadly nature, as well as the desire and intelligence of his players.

To hold off a team with the awesome firepower of Liverpool without a recognised centre forward could be one of Guardiola’s greatest coaching achievements in his extraordinary career.

So too for Kevin De Bruyne, who moved from assist king to top scorer with 15 league goals, earning himself the Premier League Player of the Year award.Getty Images

Phil Foden followed him with the Young Player equivalent, the England international spending much of the season as a false nine as he took another step forward in becoming a major player at his boyhood club.

“The magnitude of the achievement is related to magnitude of our rival, and I have never seen a team like Liverpool in my life,” Guardiola said. “Congatulations to Liverpool – they have made us better and better each week.

“I don’t have the energy or desire to think about next season now. We are champions again.”

Today belongs to Manchester City: the winners of another sublime and stupendous Premier League.