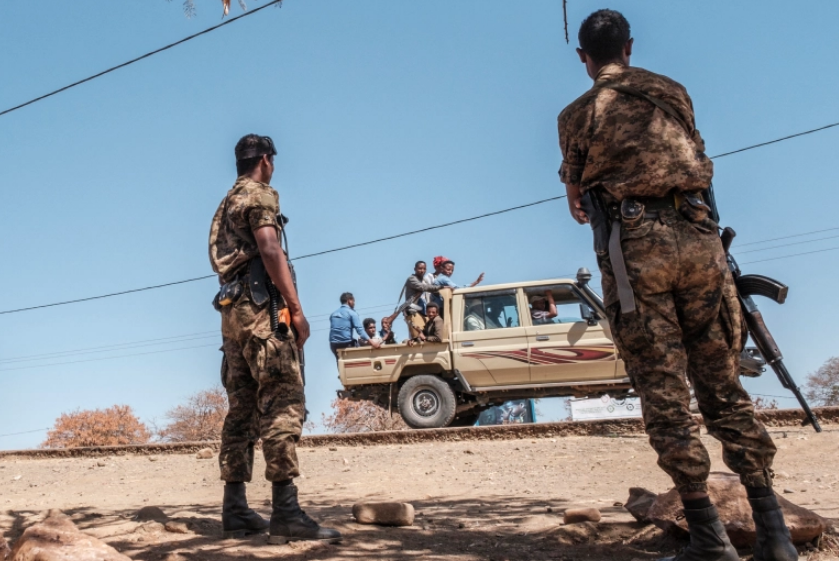 Doctors Without Borders says its staff witnessed soldiers drag civilians off public buses and execute them while their driver was beaten.

In a statement, the organisation said three staff members had been travelling in a “clearly marked” MSF vehicle on Tuesday on the road from regional capital Mekelle to Adigrat, some 120km (75 miles) further north when the attack occurred.

“Along the journey, they encountered what appeared to be the aftermath of an ambush of an Ethiopian military convoy by another armed group, in which soldiers were injured and killed. Military vehicles were still on fire,” MSF said on Wednesday in the statement attributed to Karline Kleijer, its head of emergency programmes.

“Ethiopian soldiers at the scene stopped the MSF car and two public transport mini-buses driving behind it. The soldiers then forced the passengers to leave the mini-buses. The men were separated from the women, who were allowed to walk away. Shortly afterward, the men were shot,” it added.

“The MSF team was allowed to leave the scene but saw the bodies of those killed on the side of the road.”

A short distance away, soldiers then stopped their vehicle again, pulled their driver out and beat him with the back of a gun, threatening to kill him, the charity said. Eventually, the driver was allowed back in the vehicle and the team returned to Mekelle.

“This horrific event further underscores the need for the protection of civilians during this ongoing conflict, and for armed groups to respect the delivery of humanitarian assistance, including medical aid,” MSF said.

“Our teams are still reeling from witnessing the senseless loss of lives from this latest attack.”

Al Jazeera contacted the office of Ethiopian Prime Minister Abiy Ahmed for a comment but did not receive a response by the time of publication.

Abiy, the winner of the 2019 Nobel Peace Prize, ordered a ground and air offensive campaign in Tigray in November 2020 after blaming the region’s governing party, the Tigray People’s Liberation Front (TPLF), for attacks on federal army camps. He declared the fighting over in late November with the capture of Mekelle, but it has continued.

The exact death toll in the conflict remains unclear, but thousands of people are believed to have been killed. Hundreds of thousands have been displaced. Residents of Tigray, home to more than five million people, have described massacres, widespread sexual violence and indiscriminate killings of civilians.

After months of denials, Abiy admitted on Tuesday that forces from neighbouring Eritrea were in Tigray and conceded that atrocities had been committed.

“Battle is destructive, it hurts many, there is no question about it. There have been damages that happened in Tigray region,” he said.

Abiy said soldiers who raped women or committed other war crimes will be held responsible, even though he cited “propaganda of exaggeration” by the TPLF.

The prime minister accused the TPLF’s leaders of drumming “a war narrative” while the area faced challenges such as a destructive invasion of locusts and the COVID-19 pandemic.

“This was misplaced and untimely arrogance,” he said.

On Wednesday, the state-appointed Ethiopian Human Rights Commission corroborated reports by rights groups that a massacre had taken place in Axum in November, saying more than 100 people had been killed by Eritrean troops.