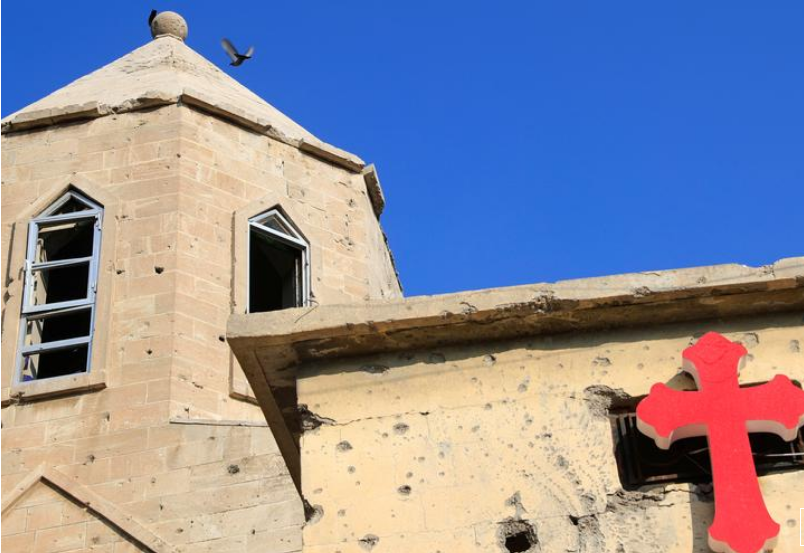 In Mosul, adjacent to the Biblical city of Nineveh, four churches representing different denominations occupy a small square surrounded by low-rise houses, testament to the role Iraq’s once flourishing Christian community played.A cross is pictured at the wall of a church in the old city of Mosul, Iraq

Today, all four churches are either damaged or destroyed after Islamic State militants occupied the city from 2014-2017, desecrated many of the buildings and used them to run its administration, including as a jail and a court.

Air strikes as Iraqi forces tried to dislodge the extremist group in fierce fighting did the rest. Those walls still standing are scarred with bullet and shrapnel holes.

“It used to be a bit like the Jerusalem of the Nineveh plains,” said Mosul and Akra’s Chaldean Archbishop Najeeb Michaeel of “Church Square”, the name given to the site that Pope Francis will visit on March 7 during his historic trip to Iraq.

Michaeel fondly recalled how, before the U.S. invasion in 2003, Iraqi Christians from different denominations would attend each other’s services on religious festivals.

Those days are gone. Today just one of Mosul’s surviving churches offers a weekly Sunday service to a Christian population that has dwindled to just a few dozen families from about 50,000 people.

Tolerated by former President Saddam Hussein but persecuted by al Qaeda and then Islamic State, Iraq’s Christians number around 300,000, one fifth of the total before 2003.

Some are trickling back after Islamic State’s defeat, but others still see little prospect in staying in Iraq and are looking to settle overseas.

A Syriac Catholic, Syriac Orthodox, Armenian Orthodox and Chaldean Catholic church are situated cheek-by-jowl in and around the dusty square. Now the area lies in ruins, as do other parts of the city.

The pope is due to hold prayers for the victims of war at Hosh al-Bieaa, known as Church Square in English, as part of a four-day trip starting on March 5, a visit Archbishop Michaeel described as highly symbolic and a message of hope.

“Where stones fell because of violence, there will always be life,” he said.

Workmen have been busy cleaning up the site before Pope Francis arrives.

Funded by the United Arab Emirates, the restoration of the Syriac Catholic church of Al-Tahera is being carried out by UNESCO in collaboration with local partners and began in 2020.

Holding pictures of the church before its destruction, assistant site coordinator for UNESCO in Iraq, Anas Zeyad, pointed to delicate Syriac carvings on pieces of greyish alabaster stone referred to locally as “Mosul marble”.

Damaged by Islamic State before its roof was shredded by air strikes, the church was used as a tribunal by the jihadist movement’s religious police, Zeyad said.

The adjacent Armenian Orthodox church, distinguishable by its dome, remains closed off to the public.

“It has not been de-mined yet,” Zeyad explained, pointing to the sealed door leading to the church that Islamic State commandeered as a prison.

“Nearly all churches in Mosul were used by Islamic State,” Archbishop Michaeel said.

Standing next to a damaged piece of sculpted alabaster representing the Virgin Mary, Ali Salem, from Iraq’s State Board of Antiquities and Heritage, said his team was reviewing many such artefacts to determine which could be repaired and used again.

“As a Muslim I am proud to help rebuild these churches,” Zeyad said, adding that he hoped “we see Christians come back to these places, so that we live together again as we have for centuries.”