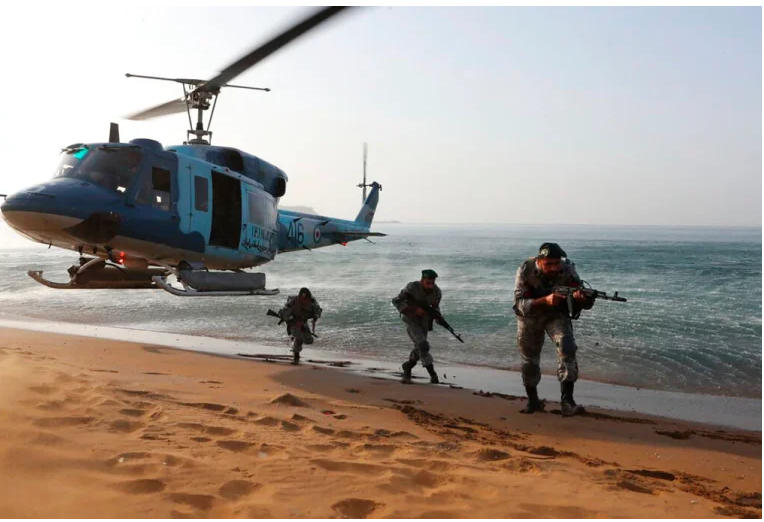 The naval part of the drill, expected to last several days, is held east of the Strait of Hormuz and in the Sea of Oman.

Iran’s army is holding a large-scale sea, land and air military drill, which comes shortly after the Islamic Revolutionary Guard Corps (IRGC) and United States Navy had a confrontation in the Sea of Oman over a seized oil tanker.

The drill was launched on Sunday morning and is expected to incorporate soldiers, vessels, armoured vehicles, manned and unmanned aircraft, and missile and radar systems in both offensive and defensive capacities.

Abdolrahim Mousavi, commander-in-chief of Iran’s army, told state television that the exercises will be held in an area encompassing one million square kilometres (386,000 sq miles) east of the Strait of Hormuz, the Sea of Oman, and the northern parts of the Indian Ocean.

On land, the drill will be held in the general area of the southeastern provinces of Sistan and Balochistan, and Hormozgan, in addition to the coasts of Makran.

“Since we are aware that the enemy is trying to gather its required information after our forces mobilised in the area, from today we are reinforcing our efforts to monitor enemy movements that had begun days ago,” he said from the southeastern port of Konarak.

Mousavi also detailed that on the first day of the drill, which is expected to last several days, vessels and commandos will undertake an operation to breach enemy shore defences from the sea, while Iranian forces and missile and radar systems will simulate defending beach lines.

Iran’s army and the IRGC have held several large-scale drills in different parts of the country in recent months amid tensions with the US, threats by Israel, and disagreements with northwestern neighbour Azerbaijan.

US ‘taken unawares’ in tanker incident

Iranian military officials on Sunday continued to praise the country’s military capabilities in relation to a confrontation over a Vietnamese-flagged tanker publicised on Wednesday that they said the US tried to seize in order to “steal” its cargo of Iranian oil. It was unclear where the tanker was heading.

Yadollah Javani, the IRGC’s political deputy, told the state broadcaster that the US was trying to prevent Iranian oil sales and enforce unilateral sanctions it imposed following its 2018 withdrawal from Iran’s 2015 nuclear deal.

“But the Americans were caught unawares because … IRGC Navy forces used heliborne operations to deploy troops on the tanker that wanted to steal Iranian oil and redirected the ship to Iranian waters from a long distance,” he said.

Earlier this week, state television aired dramatic footage of the incident, which happened on October 25, showing Iranian soldiers boarding the vessel. They were also shown warning off a US ship and helicopter, and escorting the tanker back.

The tanker, called the Sothys, and its crew are now in Iranian custody and Vietnam said it has begun talks to release them.

US officials have offered a contrasting account of what happened during the incident, saying the Iranian claim that it had been trying to steal their oil was not true and that US forces were present simply to monitor the situation.

The incident was publicised a day before the 42nd anniversary of the takeover of the US embassy in Tehran, which led to a hostage crisis lasting 444 days.

Iranian officials celebrated the anniversary on Thursday with anti-American and anti-Israeli messages, and IRGC commander-in-chief Hossein Salami praised the response to the tanker incident and pledged to resist American influence in the region.