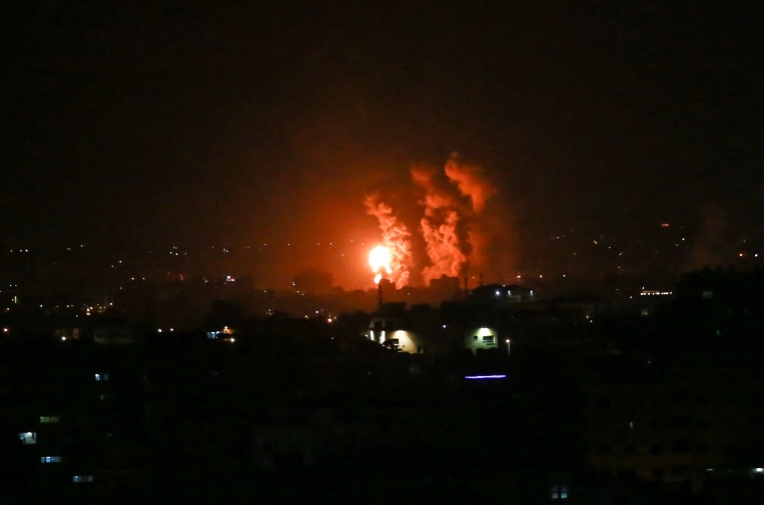 Hamas says Israel’s bombing will only make Palestinians more determined to ‘resist the occupation and step up their support for Jerusalem and its people.

Israel has carried out air raids in the central Gaza Strip for the second time this week, according to witnesses, with its military saying its fighter jets attacked an underground complex used to produce rocket engines.

The raids came before dawn on Thursday. There were no immediate reports of casualties.

The witnesses said that the attacks damaged several homes in the al-Bureij refugee camp in central Gaza.

Earlier in the night, a rocket fired from Gaza struck southern Israel, causing slight damage to a house but no injuries, Israeli police said. Four more rockets were also fired from Gaza, the Israeli military said, following its raids on the besieged coastal enclave, but were intercepted by air defence systems

No Palestinian faction claimed responsibility for the rocket launches.

In a statement, Hamas, the group that administers Gaza, said Israel’s bombing will only encourage Palestinians to “resist the occupation and step up their support for Jerusalem and its people”

The exchanges come after nearly a month of deadly violence in Israel and the Palestine, focused on Jerusalem’s flashpoint Al-Aqsa Mosque compound, known to Jews as the Temple Mount.

Israeli forces raided the compound at dawn on Thursday, and targeted worshipers with tear gas and rubber bullets, as Palestinian youth responded with petrol bombs, according to Palestinian media.

Israeli police said that dozens of rioters had thrown stones and petrol bombs from the mosque, alleging that “a violent splinter group is stopping Muslim worshipers from entering the mosque and causing damage to the site.”

Seven Palestinians, all residents of occupied East Jerusalem, had been arrested on suspicion of taking part in violent incidents on Wednesday, it added.