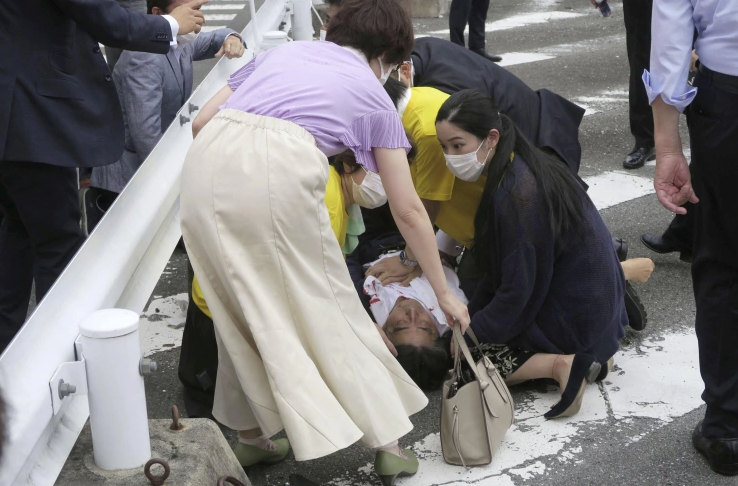 Japan’s former Prime Minister Shinzo Abe has been shot while delivering a campaign speech in the western city of Nara, according to officials.

Chief Cabinet Secretary Hirokazu Matsuno told reporters on Friday that he did not know Abe’s condition, but the NHK broadcaster, citing the local fire department, said the 67-year-old “is showing no vital signs”.

Matsuno said Abe had been shot at about 11:30am (0230 GMT), and said that “such an act of barbarity cannot be tolerated”.

NHK, citing Japanese police, said Abe appeared to have been shot from behind with a shotgun and said its reporter on the scene heard “what sounded like a gun going off twice”.

The broadcaster aired footage showing Abe collapsed on the street, with several security guards running toward him. Abe was holding his chest when he collapsed, with his shirt smeared with blood.

Kyodo News said Abe was not conscious and appeared to be in cardiac arrest.

The agency said the former prime minister, who was in Nara campaigning ahead of Sunday’s election for the parliament’s upper house, was attacked on a street near the Yamatosaidaiji Station in Nara.

A 41-year-old male suspect has been taken into custody on suspicion of attempted murder, NHK said. The suspect, who was identified as Yamagami Tetsuya, was holding a gun, which police confiscated, it added.

Abe – who hails from a wealthy political family that included a foreign minister father and a great-uncle who served as prime minister – has been best known for his signature “Abenomics” policy, which featured bold monetary easing and fiscal spending. He also bolstered defence spending after years of declines and expanded the military’s ability to project power abroad.

Supporters of Abe said that his legacy was a stronger United States-Japan relationship that was meant to bolster Japan’s defense capability. But his ultra-nationalism riled the Koreas and China, and his push to normalise Japan’s defense posture angered many Japanese. Abe failed to achieve his cherished goal of formally rewriting the US-drafted pacifist constitution because of poor public support.

Abe had been due to stay on until late 2021, giving him an opportunity to see out one final event in his historic tenure – the postponed Tokyo 2020 Olympics Games. But in a shock announcement, he stepped down in August 2020, after a chronic health problem resurfaced. Abe has had ulcerative colitis since he was a teenager and has said the condition was controlled with treatment.

Despite stepping down, Abe has remained a dominant presence over the ruling Liberal Democratic party (LDP) party, controlling one of its major factions.

The US’s Ambassador to Japan Rahm Emanuel said he was “saddened and shocked” by Friday’s shooting.

“Abe-san has been an outstanding leader of Japan and unwavering ally of the United States,” he said in a statement.

“The US government and American people are praying for the well-being of Abe-san, his family, and the people of Japan.”