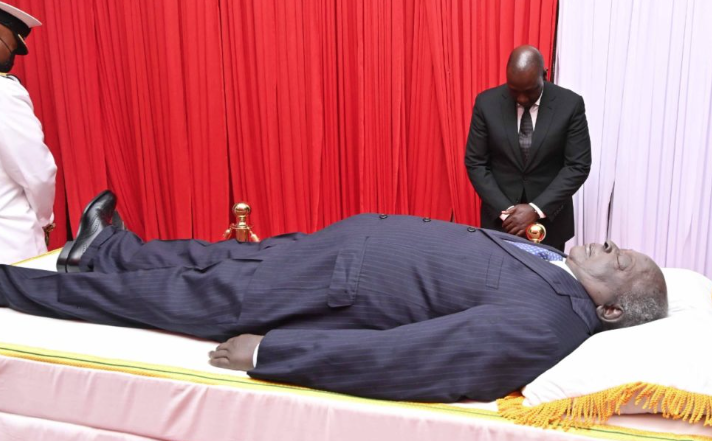 “As you all know, mzee has been ailing for about 2 to three years,” Jimmy said, “but the last few months were a bit difficult for us.”

He, however, said that the former president was strong, and put up a strong fight.

He added that the family was not caught up by surprise, because Kibaki had been ailing for quite some time, even though the public was not aware.

“As a family we are abit private, and that is why may be the public did not get to know much about his illness,” he said.

Kibaki died on April 22 aged 90. He ruled from 2002 when he took over from the late Daniel Arap Moi to 2012 when he handed over to Uhuru Kenyatta.

Odinga is set to jet back to the country on Wednesday and will attend Kibaki’s funeral service on Friday at the Nyayo Stadium before he is buried in Othaya, Nyeri county on Saturday.

“Azimio la Umoja One Kenya Coalition flag bearer Rt Hon Raila Odinga will cut short his ongoing US trip and travel back home on Wednesday ahead of the state burial of the former President Mwai Kibaki,” Odinga’s presidential secretariat stated in a statement.

The Orange Democratic Movement (ODM) Leader started his one-week tour of the US with a meeting with Kenyans in Washington, DC on Monday.

He was scheduled to hold meetings with corporate America on Monday, as he popularizes his bid ahead of the polls.

“In his engagements with corporate America on, Odinga will recognize and appreciate US corporations that have set up in Kenya and encourage more members of the group to take up the challenge to invest in Kenya,” a statement from his communication team reads.

On Tuesday, he will hold engagements with officials from the Executive arm of the US government.

Raila arrived in the US on Saturday for the tour which was slated to have him meet top US government officials, senior Congress members and selected key African leaders.

Odinga left the country on Friday for a one week tour of the United States.

In his last tour before the August 9 polls, Odinga was set to meet with the international community living in the diaspora which include business technocrats and religious leaders.