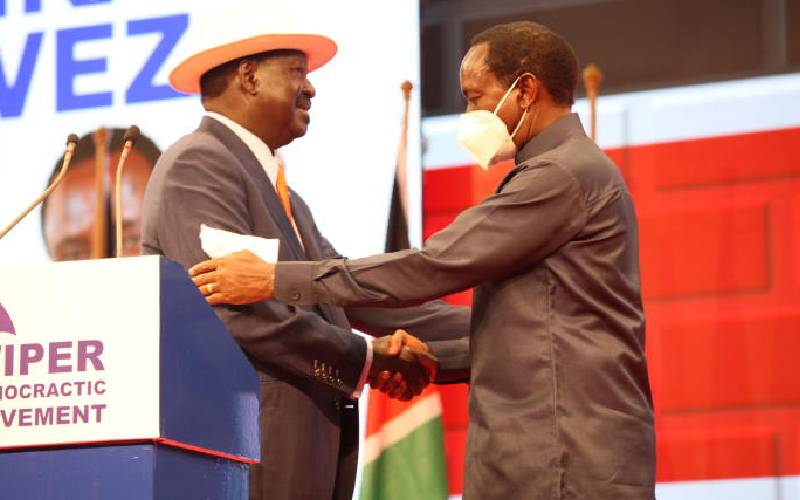 Kalonzo Musyoka, the leader of the Wiper Party, has revived memories of a contract he made with former Prime Minister Raila Odinga in 2017 when the two established the National Super Alliance (NASA).

The deal, Kalonzo revealed, was that Raila would be the coalition’s presidential candidate and Kalonzo his running mate for one term. Kalonzo would then be the head in 2022.
“This agreement will remain valid until the 2022 elections whether or not NASA wins the 2017 Presidential elections,” the agreement signed on April 30, 2017 states.

But, ahead of the August elections, Mr. Kalonzo says he is willing to renegotiate the terms of engagement with ODM leader Raila Odinga, but there is a catch.
According to the former Vice President, the deal that still connects him and Raila, which would see Raila endorse him for the presidency, will now serve as the foundation for their future conversations.

“As we enter a new round of political negotiations in our country, I feel forced to reveal this text owing to the frequently stated assertion that I am and would be an indecisive kingmaker. “A third fool to support Odinga,” Kalonzo declared.

Raila was supposed to back Kalonzo for president after only one term, according to the deal revealed by Citizen Digital.

Furthermore, if Odinga were to win the election, he would be eligible for one term in office, following which he would be expected to support Kalonzo as a presidential candidate in the 2022 election.

After three years in power, Odinga agreed to assign “major national obligations” to Musyoka in order to “focus on international duties.”

According to the Wiper Leader, the contract was never intended to be made public, but Odinga has broken it.

“By accepting to be the ODM flag bearer, Odinga has committed an irreparable material breach of the contract,” Kalonzo argued.