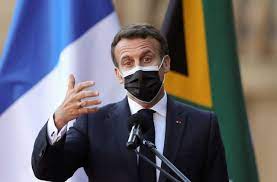 President Emmanuel Macron said on Friday France would invest in boosting the production of COVID-19 vaccines in Africa, to help close a gap in the availability of the shots between African and Western nations.

Speaking at a joint news conference with South African President Cyril Ramaphosa in Pretoria, Macron said Africa made up around 20% of the world’s need for vaccines but only 1% of vaccine production.

“How do we boost the production of vaccines on the African continent?” he said. “On this, we will this afternoon have an investment strategy to help these industrials produce more, and quite quickly.”

“We need to vaccinate as quickly as possible the maximum number of people…all over the world,” Macron said. “It is our moral duty; it is also in everyone’s interests.”

Macron is on the second and final leg of an Africa trip that included Rwanda.France’s President Emmanuel Macron briefs media during a state visit, at the Union Buildings in Pretoria, South Africa May 28, 2021.

He reiterated support for waiving intellectual property rights for COVID-19 vaccines, a move supported by U.S. President Joe Biden but opposed by Germany.

At the launch of his vaccine support initiative at Pretoria University, Macron called for regulated vaccine prices to prevent African nations being ripped off.

“Poor countries are paying much more probably than the rich countries. We are crazy,” he said. “Number one fight: … we need common pricing. This is the best way not to waste public money.”

Ramaphosa said earlier this month that if wealthy nations hogged COVID-19 shots while millions in poor countries died waiting for them it would amount to vaccine apartheid.

The European Union will deliver more than 100 million doses to Africa this year, of which 30 million will come from France.

Speaking after Macron, Ramaphosa complained that “vaccines are just trickling into Africa.”

“We cannot continue to wait at…the back of the queue,” he said. “The longer we wait, the more lives we put at risk.”