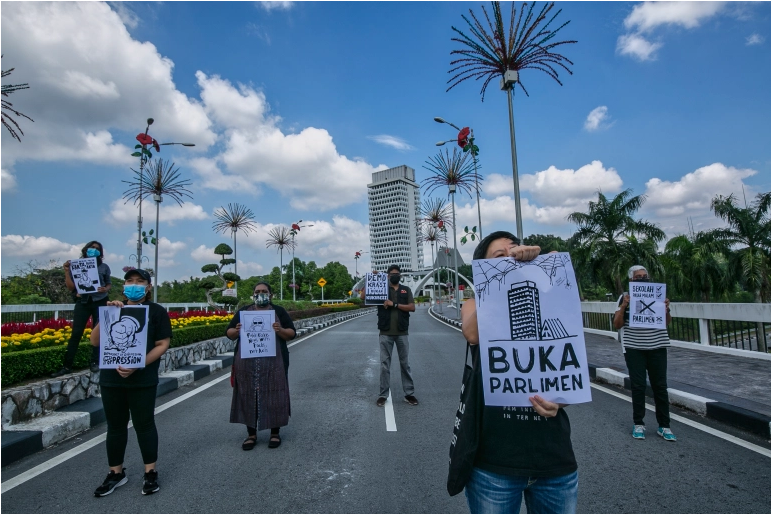 Malaysia is under increasing strain from an unrelenting surge in the coronavirus, with parliament to convene on Monday after a months-long hiatus and lockdown during which cases and deaths have only worsened pushing overworked healthcare workers to strike.

The country reported a record 17,045 cases and 92 deaths on Sunday increasing pressure on the government of Prime Minister Muhyiddin Yassin, which in January declared an “emergency” saying COVID-19 had brought the country to “breaking point”.

Some 62 percent of Sunday’s cases were in the Klang Valley, which includes the capital Kuala Lumpur and the surrounding state of Selangor, Malaysia’s industrial powerhouse and public hospitals, some of which now treat only coronavirus patients are feeling the strain.

In recent weeks, social media has been awash with harrowing photos and videos of a hospital system pushed to the brink by the sheer weight of numbers.

One video showed bodies kept in what appeared to be a hospital storeroom while the neighbouring ward was so full, patients were sitting in wheelchairs or on benches dragged in from corridors outside.

Others have shown people queueing for hours at COVID-19 assessment centres following positive tests and crowded and unsanitary conditions at government-run quarantine facilities. Originally for asymptomatic patients or those with mild signs of disease, the centres are now caring for those with far worse cases of the coronavirus.

Amid the growing discontent, Muhyiddin, whose near 18-month-old government has been under political pressure ever since it came to power, will hold a ”special” session of parliament this week just days before its COVID-19 emergency is due to expire on August 1.

Muhyiddin will brief parliament on his government’s COVID-19 response and the four-phase “national recovery plan”, which was unveiled in June and will be followed by other ministers including those responsible for the economy and the vaccination programme. MPs will have the opportunity to quiz ministers. The emergency not only suspended parliamentary business but also allowed rule by ordinance.

Meanwhile, thousands of junior doctors prepared to walk off the job in a long-simmering dispute over pay and conditions.

Those working under contract who have no opportunity for the specialisation necessary to move forward in their careers because they are not staff. An anonymous group organised a “hartal” or strike, to demand change after their grievances were not resolved.

“The pandemic has shown that Malaysia does not have enough doctors,” Dr Mustapha Kamal Aziz, a spokesman for the hartal, told Al Jazeera. “Even with the contract doctors we are burned out and exhausted.”

The contract system was introduced in 2016 by a previous government and was supposed to be a stop-gap measure to ensure medics, who are required to work their first five years in public service, could get housemanship positions more quickly. But without a long-term plan as to how the new doctors, nurses and others would be absorbed into the system, many have been left in limbo at a time when they are under increasing pressure because of the pandemic.

“This walkout is symbolic,” Dr Kamal said. “To show we mean business.”

Local media reported doctors, dressed in black, walking out at a number of hospitals including the Kuala Lumpur Hospital (HKL) and Sungai Buloh Hospital with police ordering them to disperse.

On Sunday, Malaysia’s total coronavirus cases since the start of the pandemic rose above one million.