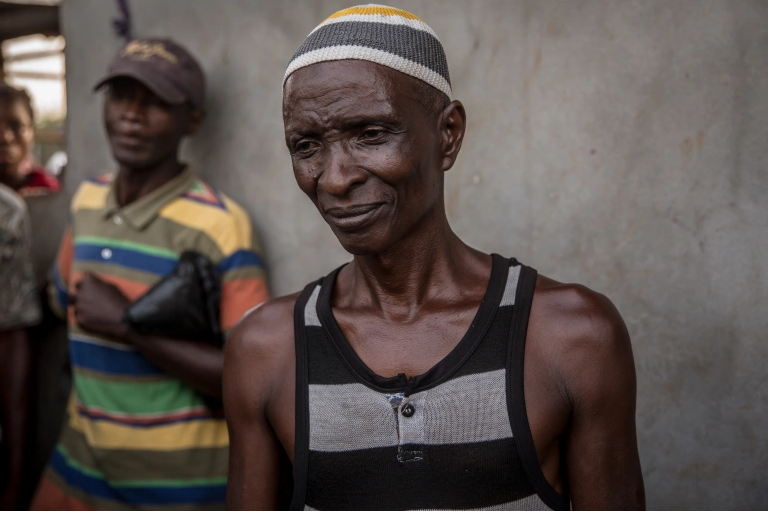 Relatives of the dead and injured from Friday’s fuel tanker explosion in eastern Freetown, Sierra Leone, have been gathering at hospitals across the city, searching for their missing loved ones.

Dozens were waiting inside the compound of Connaught Hospital, central Freetown, on Sunday, where the largest numbers of injured were taken.

On one wall were lists – some typed, some handwritten – of patients who had been identified. A young man asked for a pen so he could write his phone number beside his brother’s name, saying he still had no information about his brother’s condition. Another man said his son was in the hospital but wasn’t too “damaged”, and he hoped to take him home soon.

The death toll of the Friday night disaster has risen to 101, according to officials from Sierra Leone’s National Disaster Management Agency. The West African country has declared three days of national mourning.

The explosion happened after a fuel tanker, which was turning on a busy road, was hit by a speeding truck. In the aftermath of the crash, dozens of people rushed forward to collect the leaking fuel in containers, with the hope of using or selling it.

Ibrahim Tucker said he was visiting his sister in the area when the explosion took place.

“I didn’t see what caused the fire, I just saw flames,” he told Al Jazeera.

“I ran away … People were really, really damaged [injured] – the people who didn’t die. Many people lost their lives and some really needed medical attention, a lot of them.”

Hassan Kanu, 52, a local community worker who had contacts at the Red Cross, said he called them to take away bodies in the aftermath. “They arrived dressed like they were fighting Ebola and took the bodies to their vehicle,” he said.

Kanu said the people close to the tanker when the explosion happened had “turned to ash so you cannot recognise their faces”.

He described a motorbike driver trying to put out the flames engulfing him by speeding towards a water tank with his bike on fire. “He’s at the hospital [now] and we don’t know if he is alive or if he passed away. The fire was over his body.”

Kanu said many people in the area have lost their livelihoods due to the widespread destruction.

“Today is a sad day for us and we cannot even have food or anything to eat … We need assistance,” he said.

Many of the victims were female traders who sell small goods on the side of the usually busy road.

“A lot of my friends are missing,” said Aminata Susan Kamara, 27, who sells soft drinks.

She said she heard the sound of the vehicles crashing before people started rushing forward and calling their relatives on the phone to come and gather fuel with them.

Like other witnesses, she said the driver of the tanker disembarked, shouting at people to stay away. After that, she left to go home, but from a distance realised that fire had broken out.

Chaos ensued, and Kamara said some people trapped in minibuses died because the conductor refused to let them out until they had paid their fares – a story repeated by another witness.

On Saturday, young men were scavenging for scrap metal close to charred vehicles and areas of ash-covered ground that were still smoking. A crowd stood gaping at what some of them said was a piece of burned flesh.

The World Health Organization said it was working to deploy burn-patient care experts and will send 6.6 tonnes of emergency medical supplies to help the victims.

Victims who survive will have significant long-term needs, including plastic surgery, physiotherapy, and counselling on living with disfigurement, said Colonel Dr Stephen Sevalie, who oversees medical care in the 34 Military Hospital, where seven people died after they were admitted and roughly 20 were being treated in what was once a COVID-19 ward.

“We have to deal with what we have. We are putting together plans,” Sevalie said.

President Julius Maada Bio cut short a visit to the United Kingdom, where he was attending the COP26 climate conference, to return and meet victims of the disaster. He visited the site of the explosion on Sunday morning.

“Let us be law-abiding,” he told the gathered crowd. “We have lost over 100 of our compatriots in a single instance and now we are struggling with about one hundred survivors in the hospitals. This is a moment to come together and avoid the blame game … We must say never again will we make such a mistake.”

“This national tragedy is heart-rending,” he added in a televised address on Sunday evening while saying he had reassured victims of the government’s commitment to supporting them.