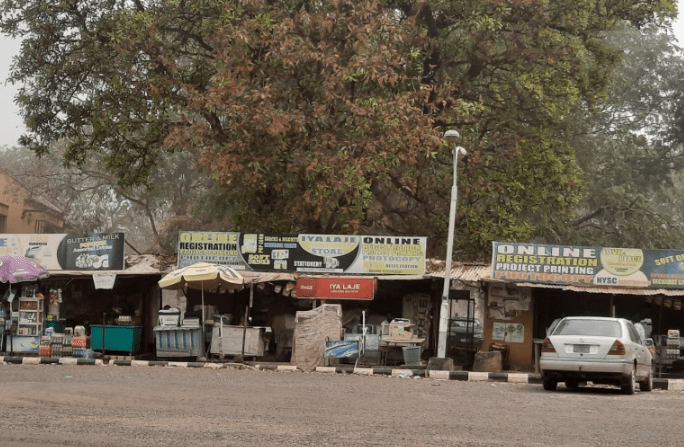 One year after a 10-month strike shut universities across Nigeria, small businesses that depend on students for patronage are reeling from the effects of a sudden and prolonged loss of income.

Ilorin, Nigeria – Last March, tricycle taxi driver Murtadoh Alfa, 33, never imagined that the declaration of a two-week academic strike at the University of Ilorin would cripple his business and leave him in debt.

But as the initial warning strike called for by the Academic Staff Union of Universities (ASUU) – the umbrella body for Nigerian lecturers working in government-owned universities – persisted, eventually stretching until December, small business owners like him who depend on students for patronage faced an unprecedented challenge.

The sprawling 5,000-hectare campus in the capital city of Kwara State in western Nigeria, hosts more than 50,000 students and nearly 4,500 staff. It is normally a hive of activity, but by late March 2020 – with lecturers refusing to return to class coupled with the government’s national lockdown measures for COVID-19 – there was an exodus of students.

The shuttle park where Alfa spent most workdays was no longer noisy and congested, but populated only with birdsong.

Tanke – a normally bustling student neighbourhood near the university – became a ghost of its former self. The hum of traffic vanished; marketplaces emptied of everyone but frustrated sellers and their stocks; and restaurants and other student social hubs adopted an alien silence. Shops began to close in droves.

Alfa’s job, rushing between the 15 faculties and administration buildings to transport students and staff from one end of the campus to the other in his privately owned tricycle taxi, came to a standstill. “When the strike happened I did not really make money,” he tells Al Jazeera. “My income reduced because there was no sale. So I had to take my meagre earnings to my family like that.”

His taxi business used to earn him up to 3,000 naira ($7.88) on an average weekday. But when the university emptied, he struggled to make even 500 naira ($1.31) a day. “However small, we managed it,” he says, but adds: “My family felt the brunt. They knew that something unusual was going on.”

When Alfa occasionally did find fares, his taxi gave him trouble. “Sometimes there would be customers at the park but my tricycle would refuse to work because I do not use it frequently, then I would struggle to get it fixed.”

Normally, he would buy his family’s regular ration of food – rice, yam flour and beans – at the start of each month. But that became impossible, and he could only afford to buy food in small, inconsistent rations. Sometimes his family had to skip meals; other times, they got by on pap or garri (cassava flakes), or whatever they could find.

Alfa is thousands of naira in debt – from costs he accrued throughout the 10-month strike. He was forced to take loans from family and friends when he could no longer provide for his three children and wife, who is chronically sick with an illness he does not want to talk about. To help ease the pressure, he has since sent his children to stay with his wife’s family in Lagos, some 300km away.

“As I speak to you presently, the situation has not improved a lot. Paying the bills is still difficult and I still owe the debts of my children’s school fees and my wife’s treatment fees,” he says.

Trade disputes are not unusual in Nigeria, and strikes in the federal academic system are seen by many as a yearly ritual. Annually, the government and the ASUU haggle over lecturers’ salaries and other university running costs. In March 2020, the ASUU went on strike after a dispute related to a new payroll system and the government’s subsequent non-payment of staff salaries.

The University of Ilorin, which had abstained from participating in ASUU’s strike actions for nearly two decades, despite being a public institution, joined in last year. “We (the school) have not benefitted anything from the government for us not going on strike. Rather, we have been maligned by our colleagues. We have been labelled traitors by our colleagues,” Professor Ajao Moyosore, the ASUU chairman of the school, explained to Nigerian media last March.

For months, representatives of the government and those of the ASUU repeatedly traded blame as to who was responsible for the prolonged strike. Meanwhile the academic walkout – and its consequences – continued. By December, when the strike finally ended, students who vacated their universities had lost an entire academic year.

As things have slowly returned to normal for students, the small businesses dependent upon their custom have struggled to get back on their feet. Many have had to close.

“A lot of Nigerian universities are built in rural, or developing, communities with the hope that the area progresses as the school advances,” Baliqees Salaudeen, a community development expert, tells Al Jazeera. “Business owners relocate their enterprise or open a branch in these growing communities. So when a strike happens, their sales become entirely crippled.

“The sad thing is that the struggle of these business owners is often relegated to the back. No one talks about it.”

Dolapo Owolabi, 35, runs a buka – a small local restaurant built with planks of wood – along an untarred street. Her customers would indicate the amount of food they wanted and Owolabi would charge them for their meal – rice, beans, spaghetti and some local dishes – accordingly.

Before the strike, at least 250 people ate here every day, she says. She would prepare and sell up to half a bag of rice each day, but during the strike she would make less than a quarter of that. Still, a substantial portion of that was left over, she says. Her three children, aged 3, 5, and 7, could not understand her financial hardships and would nag her to buy them treats.

“My children like to eat biscuits and all these other things that little kids like to eat. They do not know that times are hard and so when I cannot buy the exact things I used to buy for them, they cry. Sometimes I am forced to snap at them because I am equally frustrated,” she says.

When Owolabi’s business suffered, she temporarily closed her buka and resigned herself to staying home to look after her children, who could not attend school because of the coronavirus. “We would just sit at home and watch movies when IBEDC (the electricity company in charge of power supply in the area) restores power.” Sometimes they are without electricity for up to nine hours a day.

Owolabi and her children were able to get by with some help from her husband who works as a driver in Lagos. But her landlord is running out of patience as she has not paid her rent since December.

Like other business owners, Tina, a woman in her early forties who prefers not to share her full name, had her own share of the financial meltdown last year. At the heart of the dusty Oke-Odo market, next to a pharmacy and hair salon, is her womenswear boutique, a medium-sized shop with dressed-up mannequins in the window.

Her struggles did not stop there. Tina’s marriage of 18 years, which was already strained, ended. After that, she dug into her slim savings to rent a new apartment. She and her two children, aged 11 and 17, still struggle to eat some days. The 17-year-old is due to start university, but has had to suspend her enrolment due to financial constraints.

“I hope that during the next admission window, our situation would have improved so that she can join her colleagues in the school of higher learning,” Tina says.

Elsewhere in Tanke, Jamiu Oriade, a tailor who was barely making ends meet before the strike, has seen his situation worsen significantly.

Early last year he relocated his shop from Eyenkorin, an area close to the outskirts of Ilorin, to the student community in Tanke because of the promise of more customers. But the opposite happened, and since last March he has struggled to afford even basics, such as food.

Oriade’s shop – a blue-painted container which is now faded from the effects of months of dust – is a small space. It accommodates his sewing machine and a table he uses to cut fabric and iron on. After business dried up – and with no savings and a lack of other support – he abandoned his sewing machine to become a labourer, a job he confesses is back-breaking and pays peanuts. “I became a labourer at construction sites even though the pay was poor.”

He holds up his palms, urging me to feel how they are now as tough as rubber, the inside of his knuckles visibly rough. “This is not how a tailor’s hand should be.”

Oriade continues to hold on to his shop – having paid a year’s rent in advance in 2020, a common practice in Nigeria – while he waits for students and regular university life to resume.

On December 23, 2020, ASUU president, Professor Biodun Ogunyemi, announced that the association would be calling off its strike action after reaching a compromise with representatives of the government. At the University of Ilorin, physical classes are scheduled to resume this month. But due to the coronavirus, the university is also exploring e-learning.

In Tanke, some students have returned and businesses have started coming back to life. The streets are starting to regain their old vigour, and, once again, social spots and marketplaces are filling up. Business owners can now open their stores with the assurance of making sales.

But Ahmed T Yakubu, a lecturer in the department of economics at the University of Ilorin, says the struggles small businesses face as a result of the strike, could affect the nation’s economy.

“Some of these businesses have shut down and their owners returned to ‘square one’. And even more shops may fold up due to extreme hardship,” he tells Al Jazeera. “In Nigeria, about 60 percent of our economy is informal and 65 percent are operators of small businesses. If some of those who constitute this 65 percent are forced to die due to the government’s negligence, then there would be trouble.”

Hundreds of businesses located in Tanke are thought to have directly suffered from the impasse in academic activities, according to community development experts. These include provision stores, restaurants, hair salons, pharmacies, shoemakers, boutiques, book and stationery sellers, and even landlords who are unable to collect rent from students.

“More unemployment cases are escalating because people who are self-employed have become jobless. This only means that poverty will abound,” Yakubu says. “The consequences that we witness around the University of Ilorin campus alone is terrifying. Now when you aggregate that across other schools in the federation, you know there is a full-blown crisis.”