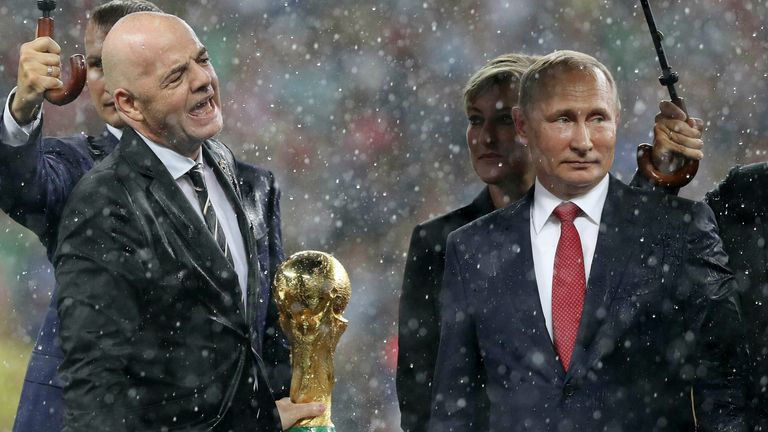 Fifa and Uefa have acted in unison to suspend Russian teams from international football competition on Monday as global sport closed the door on Russia following the invasion of Ukraine.

The most powerful bodies in football joined the International Olympic Committee in acting after days of growing protest. The suspension means Russia will not be able to face Poland in a World Cup play-off semi-final next month, while its women’s team will also be barred from this summer’s European Championship in England and its remaining club side in European competition, Spartak Moscow, will no longer compete in the Europa League.

In a joint statement, the two organisations said: “Fifa and Uefa have today decided together that all Russian teams, whether national representative teams or club teams, shall be suspended from participation in both Fifa and Uefa competitions until further notice.

“These decisions were adopted today by the Bureau of the Fifa Council and the Executive Committee of Uefa, respectively the highest decision-making bodies of both institutions on such urgent matters. Football is fully united here and in full solidarity with all the people affected in Ukraine. Both Presidents hope that the situation in Ukraine will improve significantly and rapidly so that football can again be a vector for unity and peace amongst people.”

Uefa also announced a second highly significant move, confirming that it had cancelled a long-standing and highly lucrative sponsorship deal with Gazprom. The Russian gas company had been a sponsor of the Champions League for a decade and the final of this year’s competition was to have been played in the Gazprom Arena in St Petersburg.

Last week Uefa moved the match to Paris, however, and has now severed the relationship entirely. “Uefa has today decided to end its partnership with Gazprom across all competitions,” a statement said. “The decision is effective immediately and covers all existing agreements including the Uefa Champions League, Uefa national team competitions and Uefa Euro 2024.”

On Sunday, Fifa had said that Russia could continue to compete in World Cup qualifying if they changed their name and played matches on neutral grounds. An action described by Fifa as taking “initial measures”, it was resisted fiercely by Poland, Russia’s opponents in World Cup qualification. The Polish stance was supported by a number of other European nations, too, including the football associations of England, Scotland, Wales and the Republic of Ireland.

As pressure grew on Fifa on Monday a change in direction was signalled by an intervention from the IOC. Citing the mission of the “Olympic Movement” to “contribute to peace through sport and to unite the world in peaceful competition beyond all political disputes”, the IOC issued a lengthy resolution calling on all sporting organisations to act.

“In order to protect the integrity of global sports competitions and for the safety of all the participants,” the resolution read, “the IOC Executive Board recommends that International Sports Federations and sports event organisers not invite or allow the participation of Russian and Belarusian athletes and officials in international competitions”.

The IOC added a condition, however, which could yet mean Russia competes in the Winter Paralympics which start in Beijing this weekend. In situations where short notice “for organisational or legal reasons” meant Russia and its ally in the invasion of Ukraine, Belarus, could not be excluded, they “should be accepted only as neutral athletes or neutral teams”, the IOC said. This would be a similar sanction to that applied to Russia at last year’s Tokyo Olympics, where “no national symbols, colours, flags or anthems should be displayed”.

The Ukrainian delegation for the Winter Paralympics is yet to arrive in Beijing due to the invasion and on Monday evening the British Olympic Association called for Russian athletes to be banned immediately from competition.

There are further questions now likely to be asked over the involvement of Russian athletes in non-Russian teams, and also in individual sports. One of the most prominent examples is Daniil Medvedev who took over the mantle of the men’s world No 1 tennis player from Novak Djokovic on Monday and over the weekend made a statement calling for peace.

The Ukrainian Tennis Federation board member Seva Kevlych told Reuters that Medvedev should not be allowed to compete in grand slam matches. “Let [Medvedev] play on the ATP Tour but grand slams are ITF events and if you lose the possibility to play in grand slams he could never be world No 1,” Kevlych said. “He shouldn’t play in the French Open, US Open and Wimbledon.”

Kevlych’s words echoed a broader, sweeping agenda for action against Russia issued by Ukraine’s ministry of sport. Arguing that “Russian authorities use sport achievements for propaganda of their own ideology” and as “a tool for popularizing ideas of bullying, murder and destruction”, the ministry called not only for athletes to be excluded from competition but for Russian representatives to also be removed from governing bodies and Russian companies from being allowed to act as sponsors.