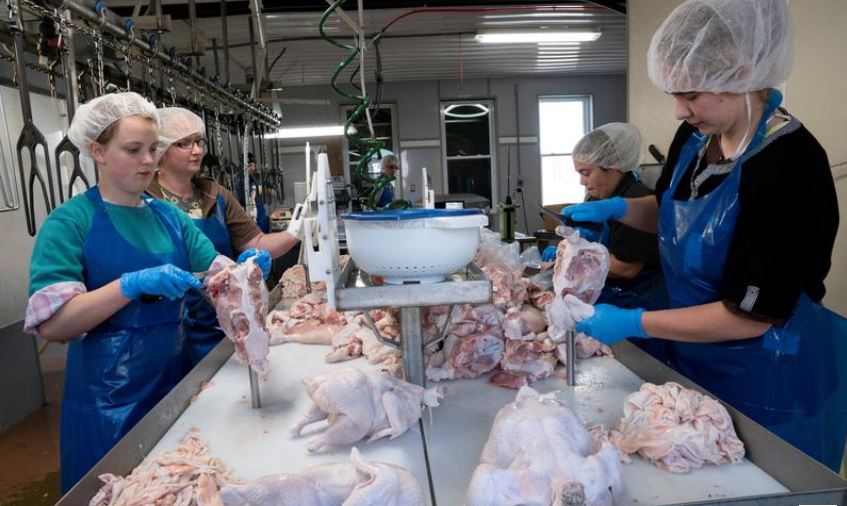 COVID-19 vaccines are making their way into the arms of U.S. meat and agriculture workers, but companies and union officials say progress needs to be faster after coronavirus outbreaks idled slaughterhouses and sickened thousands of workers.FILE PHOTO: Workers prepare chicken at Buckeye Poultry in Greenwich, Ohio, U.S.

Nationwide, 22,000 meatpacking workers have been infected or exposed to the virus, and 132 have died, according to the United Food and Commercial Workers (UFCW) International union.

A U.S. Centers for Disease Control and Prevention (CDC) committee in December recommended frontline food and agriculture workers receive access to vaccines ahead of people aged 65 to 74 and younger Americans with high-risk medical conditions.

But many states prioritized older residents, who account for the majority of U.S. COVID-19 fatalities, and other essential workers like teachers.

Companies are constrained by limited supplies and regulations in individual states and cannot purchase vaccines directly from drugmakers.

“Priorities have shifted in the past two months in a range of states, and that has lowered the priority status of our critical and essential employees,” said Keira Lombardo, chief administrative officer for Virginia-based Smithfield Foods, the world’s biggest pork processor.

South Dakota, where WH Group’s Smithfield runs a massive pork plant in Sioux Falls, may not begin vaccinating food and agriculture workers until April, according to state plans. It will first give shots to teachers, funeral home workers and people under 65 with underlying health conditions.

More than a third of Smithfield’s 3,700 employees in Sioux Falls had tested positive for the virus by mid-June 2020, according to the U.S. Department of Labor. BJ Motley, president of the local UFCW union, said workers are asking when they can be vaccinated, but the company has not provided information about scheduling shots.

“All we can do is keep pushing,” he said.

Smithfield said it told employees the vaccine will be distributed at the Sioux Falls plant once supplies are available.

‘POTLUCK AT THE STATE LEVEL’

The U.S. Department of Agriculture told Reuters it is “again contacting governors in each state to encourage they prioritize food workers for vaccinations, as public health agencies have recommended.”

The United States has been shipping millions of doses of vaccines to states each week, but demand so far has outpaced supplies. By the end of March, vaccine producers plan to ship tens of millions more shots. The supply will be further helped by Saturday’s U.S authorization of Johnson & Johnson’s one-shot vaccine.

Tyson Foods, the nation’s largest meatpacker by sales, said on Monday that many of its 13,000 Iowa employees would start getting the vaccine this week. About 2,000 Tyson employees out of 100,000 hourly workers received vaccines as of Feb. 25.

Rival meat processor JBS USA plans to shut a beef plant in Greeley, Colorado, on March 5 and 6 for vaccinations, after almost 400 worker infections there. The local UFCW union that represents plant employees said the union secured on-site access to shots by working with the state and National Guard.

JBS and affiliated chicken producer Pilgrim’s Pride Corp said about 8,500 employees in eight states, including Colorado, will have access to vaccines this week.

Cargill Inc will work with healthcare providers to vaccinate employees at a beef plant in Kansas and at offsite locations in Nebraska and Michigan, according to the company. At chicken processor Perdue Farms, about 800 employees out of 21,000 had received one shot by Thursday.

Julie Anna Potts, president of the trade group North American Meat Institute, said last week she would like the federal government to be more involved with getting vaccines to meatpacking workers.

“Unfortunately it’s just been kind of a potluck at the state level,” she said.

Worker vaccinations are also progressing slowly in the wider food industry, said Mike Gruber, vice president of regulatory affairs at the Consumer Brands Association. The group represents food manufacturers like Kellogg Company and estimates 300 of its 1.7 million essential workers have received a shot.

Some state officials are also concerned about fruit and vegetable workers.

North Carolina Agriculture Commissioner Steve Troxler said temporary agricultural workers are beginning to arrive from Mexico and other countries under the H-2A visa program without being eligible for shots. They often live in group housing, which can facilitate the spread of the virus, and move from state to state to harvest seasonal crops.

“We really wanted to get these workers vaccinated before they were spread out across the state,” Troxler said, “but it doesn’t look like that’s going to happen.”