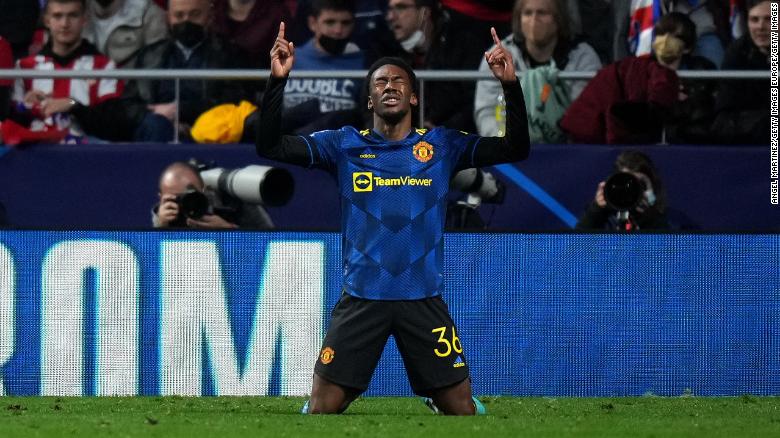 Anthony Elanga’s late equalizer rescued an unlikely 1-1 draw for Manchester United against Atletico Madrid in the first leg of the teams’ Champions League last 16 contest.João Felix’s powerful header had given Atletico an early lead in Wednesday’s game and the home side looked on course for victory, having controlled proceedings at the Wanda Metropolitano.But the 19-year-old Elanga, brought on as a second-half substitute by Ralf Rangnick, leveled the tie with United’s first — and only — on target shot of the night after he was put through on goal by Bruno Fernandes’ pass.

“I’ve dreamt of moments like this, scoring in the Champions League,” Elanga told BT Sport. “A big occasion like this against a top European team like Atletico Madrid, like I said, it’s a dream come true.”

Felix, one of Atletico’s standout players in the game, had given Atletico the lead after just seven minutes when he connected with Renan Lodi’s cross to fire a header off the post and into the Manchester United net. Elanga celebrates his first Champions League goal. Another Lodi cross almost created a second goal for the home side at the end of the first half, but Sime Vrsaljko’s header deflected off Victor Lindelof’s face and onto the crossbar. Atletico looked likely to hold onto the lead throughout the second half, but Elanga’s first-time finish on 80 minutes — his first goal in the Champions League — dramatically changed the complexion of the tie. Antoine Griezmann came close to restoring Atletico’s lead minutes later, but his left-footed shot from inside the United box bounced off the crossbar. Elanga’s goal means the tie is evenly poised ahead of the second leg in Manchester on March 16. And after challenging domestic campaigns so far this season — reigning La Liga champion Atletico is fifth in the Spanish league, while Manchester United is fourth in the English Premier League — both teams will be trying to keep their hopes alive in the Champions League. Felix celebrates his goal against Manchester United. In Wednesday’s other game, Benfica and Ajax drew 2-2 after Ajax had twice led at the Estadio da Luz.

Dusan Tadic opened the scoring for the Dutch side with a half volley before Sebastian Haller’s own goal made it 1-1. Four minutes later, however, Haller scored at the other end to give Ajax the lead at halftime with his eleventh goal in seven Champions League games — the fastest it has taken any player to get to 11 goals in the competition’s history. But, with 18 minutes remaining, Roman Yaremchuk equalized for Benfica with a close-range header to level the tie ahead of the second leg in Amsterdam next month.