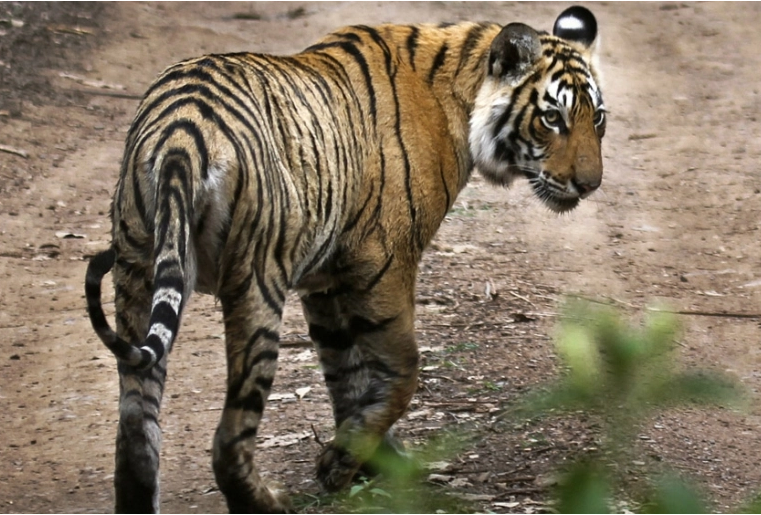 With a dense population of 1.3 billion, India is vulnerable to human-animal conflict as people encroach on wildlife habitats.

The hillocks dotting the coal hub of Chandrapur are a green oasis in the central Indian region pockmarked with coal mines, where even rain puddles are black, and a coal-fed thermal power plant belches smoke into the sky.

But Santosh Patnaik, who manages programmes aimed at securing a green and fair transition with New Delhi-based Climate Action Network South Asia, noted the coal industry “has outcomes we don’t really know about yet”.

India is the world’s second-largest coal producer after China, yet supply is falling short of the demand of its domestic industry and the government is ramping up production.

The impacts are mostly negative for local communities, said Patnaik – from increased poverty and health damage to the human-animal conflict now happening in Chandrapur.

“Human interference is the main reason behind disturbance in the environment – and fossil fuel extraction is posing an existential threat to the entire ecosystem,” he added.

With a dense population of 1.3 billion, India is vulnerable to human-animal conflict as people encroach on wildlife habitats, with Chandrapur especially at risk as its mines are close to a forest, experts said.

Bandu Dhotre, a member of the wildlife board of western Maharashtra state where Chandrapur is located, said the area had seen leopards, bears and now tigers, whose numbers are rising in tandem with species protection efforts.

“They have a conducive habitat, access to water and prey. But people are not foreseeing the future … This will be a big problem,” said Dhotre, founder and president of environmental organisation Eco-Pro, pointing to the hills on a rainy morning.

Chandrapur is home to the Tadoba Andhari Tiger Reserve – one of 50 such reserves in India – and its tiger and leopard populations have doubled to about 85 and 105 respectively in the last 10 years as conservation efforts bore fruit, officials said.

There is no mining activity in the forest or its buffer zones, but mines and power plants have been built on the natural corridors the animals once used to move between forest areas.

Meanwhile, the tree plantations mandated by India’s environmental laws on the dunes – spread over about 930 hectares (2,300 acres) in Chandrapur alone – have inadvertently provided a new habitat for migrating wild animals as their numbers rise.

Villagers living near the hillocks, called overburdens by the mining industry, dare not venture out alone or after dark following attacks on them and their livestock in recent months.

“We feel scared all the time. We have lost cows and buffaloes to tiger attacks on our farms,” said Pankaj Dhingare, a farmer and council member in Khairgaon village, which is located next to an overburden.

“We are bearing losses, when the miners are making a profit. They should compensate us financially, or at least give us work,” said Dhingare, showing a video on his phone of a tiger on a village road the previous night.

‘This could be a first in the world’

Less then two kilometres (miles) from Khairgaon, Nisha Umashankar Dandekar, 38, spoke softly of how a leopard pounced at her five-year-old a year ago, digging its claws into her tiny neck and killing her.

“I fainted when I saw her. They took her to the hospital, but she was gone,” said her mother. “This is such a dense forest. I keep thinking if I had not allowed her to play that day, she would have been alive.”

Dandekar lives in the residential complex of the Chandrapur Thermal Power Station (CTPS), its rain-soaked streets lined with vegetation and signboards with tiger images, cautioning residents to stay alert.

“This could be a first in the world that tigers are moving in industrial premises. They are moving even in the thermal power plant,” said chief engineer Pankaj Sapate. “We don’t know what to do.”

Local environmentalists said they had only heard stories of tigers and leopards as children.

“Now the tiger is sitting in people’s farmlands,” said Suresh Chopane, president of the Green Planet Society, a Chandrapur-based nonprofit.

“Half the tigers now live in the overburdens. And these tigers are used to jeeps and cars and human presence. They are not scared.”

Locals refer to Chandrapur as a hub for “black gold” due to its rich coal reserves – but the name is losing its sheen as livelihood problems mount amid the wildlife attacks.

Daily wage worker Sunil Govinda Lengure, 32, resents the hillock facing his village after a bear attacked him in February, tearing at his skull.

His head still hurts when he tries to lift heavy loads.

“I used to earn 300 rupees ($4) a day but I am unable to do any work now,” Lengure said, standing in front of his one-room shack where he lives alone.

He received 5,000 rupees ($68) from local officials to help with his treatment, even as another bear-attack victim in his village was forced to sell his cattle to raise money for his treatment.

In Payali Bhatali village, meanwhile, Suresh Shankar Khiradkar, 59, sat on a cot, his face a mesh of gashes after losing one eye to a bear attack on his farm last month.

His family blamed his predicament on the mining in their back yard, as their village is near a sandhill whose rehabilitation has been stuck in disputes for about ten years.

Concerns run deep in Chandrapur, as officials said animals born in man-made habitats could not adjust to forests, meaning a plan to relocate them to parks or tiger reserves may not work.

NR Praveen, Chandrapur’s chief forests conservator, said those settled in the overburdens would not find the cattle and prosopis trees they now rely on for food and shelter elsewhere.

Officials with state-run Western Coalfields Limited (WCL), which operates 10 mines in Chandrapur, said coal extraction from its four highly productive opencast mines required huge amounts of sand and rocks to be removed and dumped 2 to 5km (1 to 3 miles) away.

The trees planted on the resulting dunes help curb soil erosion and air pollution, they added.

WCL did not respond to questions on what steps it is taking to prevent human-animal conflict, but officials speaking anonymously said the issue was not related to mining activity.

Dandekar, meanwhile, moved to another block a few months after her daughter’s death but still spots wild animals often.

“We can stay alert, but children will play, right?” she said, calling her 13-year-old son in from the terrace. “This should not happen again, to anyone.”