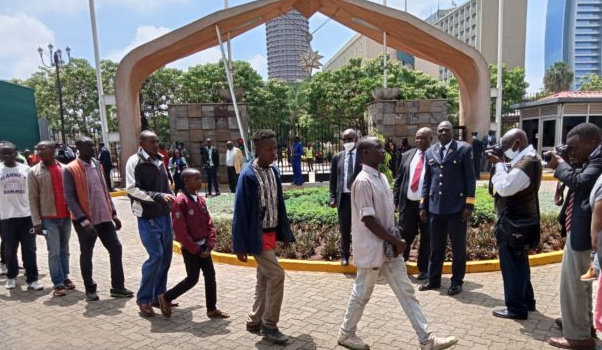 Today Kenyans continue to stream into the Parliament precincts to pay their last respects to the late former President Mwai Kibaki in the last day of public viewing of his body.

The body arrived at Parliament earlier today escorted by a battalion of military precision.

Members of the National Assembly will also hold a special sitting to eulogize the late Kibaki.

Preparations for the final mass, and resting place in Othaya are in top gear with the military taking charge of all the work.

At both his home and the Othaya Approved School where the funeral service will be held, tents were being constructed under heavy guard mounted by Kenya Defence Forces officers.

Staff from the Ministry of Public Works were also deployed to the site to execute construction and tarmacking of roads leading to the venue in Othaya in a bid to beat the fast-approaching headline.

The Nyeri County assembly will hold a special sitting on Thursday as a way of honouring Kibaki.

Speaking during a press conference, Speaker John Kaguchia said that during the session they will invite governor Mutahi kahiga to address the county on Kibaki’s contribution to the county’s development as the senior-most politician.

Tomorrow will be a big day for Nyerians for we will hold a special sitting in honour of Kibaki he is a son of Nyeri County, and we must honour him by all means later we will light candles in the evening to recognize his contribution to the welfare of our county,” Kaguchia said.

Kaguchia however said that the president body should make rounds in several towns within Nyeri county so that residents can be able to pay their last respect to one of their sons.