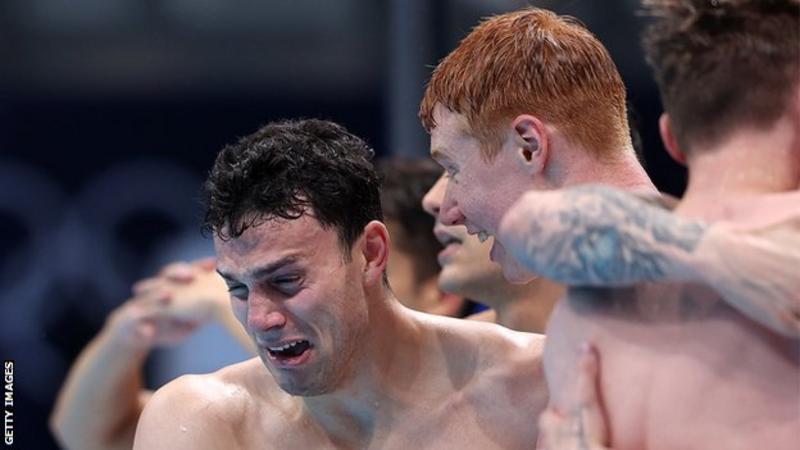 Great Britain’s men secured another gold in the Olympic pool with a dominant victory in the 4x200m freestyle relay in Tokyo.

Great Britain were favourites going into the race having qualified fastest and they produced what former Olympian Mark Foster described as a “demonstration of a performance”.

The victory means Dean became the first British male swimmer to win two golds at the same Olympic Games since 1908.

It is also the first time in 113 years that Great Britain have won three swimming gold medals at an Olympics.

Guy, who put Britain into pole position with his strong second leg, shed tears as Scott brought the team home.

He won silver in the event in Rio four years ago and was overwhelmed after finally securing his first Olympic gold.

The United States pushed Britain in the opening leg, where they were led by Dean, but Guy closed the gap before Richards took a second out of America’s lead.

That gave Scott a healthy head start and he took full advantage, finishing just short of a new world best.

“I think this is really special, with those boys – but we are a bit gutted we didn’t get the world record!” Scott said.

Foster, who was pacing the BBC studio as he watched the race, said: “I so wanted them to get the world record – but they will get it, because it is a young team. What a mature performance.”