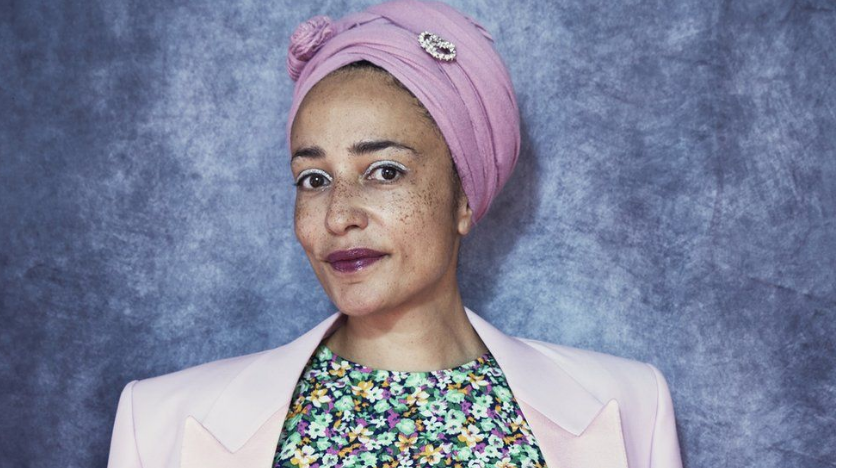 But the author told the BBC in her only UK interview that writing the bawdy comedy The Wife of Willesden, which opens on Wednesday, has been “joyful”.

Smith has adapted The Wife of Bath’s tale from Geoffrey Chaucer’s The Canterbury Tales, translating a salacious 14th Century medieval text, written in rhyming couplets, into a contemporary story set in north-west London, where she was born and raised.

She is the author of five novels, including her award-winning debut White Teeth, about post-war multicultural Britain.

Her third novel, On Beauty, won the Orange Prize for Fiction. She has also written numerous essays and a children’s book.

But at the age of 46, playwriting is a new departure. The author says it is “slightly overwhelming”.

“I’ve spent a long time working by myself and being used to being responsible only for myself, so I’m not a great team player,” she says. “I’m kind of allergic to responsibility.”

However, she adds that it has been marvellous “not to be the only brain in the room”.

“It can get quite depressing, 20 years in a room writing books,” she explains.

So working with 10 actors and director Indhu Rubasingham has been “like a life force”, she says. “I felt happy to have colleagues.”

“It’s been wonderful to watch people make something collectively,” she says, and “humbling” to see them bring her words to life on the stage.

But the play came about by chance. Smith describes it as “an odd story, an accidental adventure”.

When Brent submitted its bid to be London Borough of Culture 2020, Smith blithely agreed to participate. “I guess I didn’t immediately imagine Brent would win,” she admits.

But it did, and under increasing pressure to come up with an idea (“it kind of got a bit heavy”) and in a growing panic, Smith looked at her bookshelf and spotted a copy of The Canterbury Tales.

On the spur of the moment, she suggested she could translate a short, page-long “monologue” from The Wife of Bath’s Tale, “because that’s the one everybody remembers”, which could then be published in a local magazine.

However, while she was flying to Australia, a news release was sent out announcing she was translating the whole of The Wife of Bath into a play.

Smith was perturbed to say the least. “And once it was kind of out in the ether, I felt duty bound to do it.”

But now, looking back on the project, she believes “it was a gift”.

“Once I got over the shock and stopped trying to get out of the situation, all kinds of fruitful things came out of it.”

She compares writing the play to “homework”, observing: “I respond very well to homework.”

Smith had translated Chaucer into contemporary English as a student at Cambridge University.

“A blank page is much more terrifying and I never had to deal with a blank page. I always had these handrails of Chaucer’s, which was incredible. They’re the best handrails you could hope for.”

The Canterbury Tales is a collection of 24 stories told by a group of pilgrims during their journey from London to Canterbury Cathedral.

One of the pilgrims is called Alyson, or The Wife of Bath. In her tale’s prologue, she reveals that she has been married five times and shares her views on sexuality, consent and contempt for class privilege.

The Wife of Willesden explores the place of women in society and tells the story of Alvita, a Jamaican-born British woman in her mid-50s who has also been married numerous times. It touches on misogyny, slut-shaming and domestic violence.

“They’re literally in the original,” Smith explains. “I honestly think that Chaucer is radical. I think people forget what’s in it.

“Even as I was translating it I was like, I can’t say that. But then I thought, well, if it was said 600 years ago, if they could take it then, then maybe they can take it now.

However much she ended up enjoying working on The Wife of Willesden, Smith does not think she will write another play – unless she has “an incredibly good idea”.

“First play, probably last play,” she laughs. “I have too much respect for real playwrights to be jumping on that bandwagon.”

She has walked out of plays before the final curtain, though, she admits.

“I do get the idea that I don’t get more of my money’s worth by being miserable for longer. That’s been a feeling I’ve had in the theatre.”

And if people were to walk out of her play? “I’d be really sad,” she says. But “I’d have to defend the freedom of art appreciators of all kinds”.

In contrast, Smith believes you should always finish reading a book.

Crime writer Mark Billingham told the Cheltenham Festival earlier this year that if a novel had not gripped him within 20 pages then he would “throw it across the room angrily”. He added that he gave up on five out of every 10 books because “life’s too short” and “there are so many great books out there”.

Smith says: “No, I don’t read that way. I persist.

“All respect to Mr Billingham, but a lot of literature would fall by the wayside if 20 pages were all that you could possibly give it.

“Of course there are books sometimes that I don’t finish, but it’s rare. I guess I maybe self-select a little earlier on to avoid books that I know I’m going to absolutely be bored by or hate.

“But no, I’m always interested in this unmeasurable relationship between me and this unknown author. It’s something I want to get into when I’m reading, I don’t want to cut loose.”

Now that The Wife of Willesden is written and on stage, she can return to working on her new novel, which she reveals is a historical work set in north-west London in the 1830s.